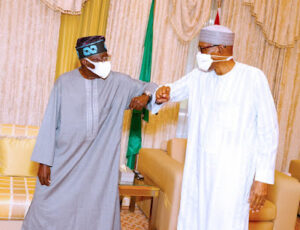 Bola Tinubu, a chieftain of the All Progressives Congress (APC) and presidential hopeful, says without him, President Muhammadu Buhari wouldn’t have won the presidential election in 2015.

Tinubu spoke on Thursday at a meeting with APC delegates in Ogun state.

Describing the election as a “battle”, Tinubu also spoke on how he “surrendered” the vice-presidential ticket to Yemi Osinbajo, when concerns were raised over a Muslim-Muslim ticket for the APC.

“Buhari asked me to be his running mate, but Saraki campaigned against a Muslim-Muslim ticket. He felt it would affect his ambition to be senate president. The senate president could not be a Muslim as well. They rose against it. I said ‘I have someone that’s a Christian and I will nominate him. This party must not scatter’. And I nominated him (Osinbajo). That’s the truth,” Tinubu said in Yoruba.

“They asked me to bring three names. Yemi Cardoso was number one. Wale Edun was number two, Yemi Osinbajo was number three. I decided to drop just one name since I was surrendering my right. Buhari agreed to this and I dropped Yemi Osinbajo’s name.

“You have not heard this from me before. This is the first place I am saying this. It’s my time now.

“If not for me that led the battlefront, Buhari wouldn’t have won. He contested first, second and third time, but lost. He even said on television that he won’t contest again.

“But I went to his home in Katsina. I told him ‘you would contest and win, but you won’t joke with the matter of the Yoruba’. Since he has been elected, I have not been appointed minister. I didn’t get a contract.

“This time, it’s Yoruba turn and in Yorubaland, it’s my turn.”

Tinubu appealed to the 60 delegates in Ogun to support him during the APC primary election.

Recall that President Buhari has appealed to governors of the APC to assist him in picking his successor.