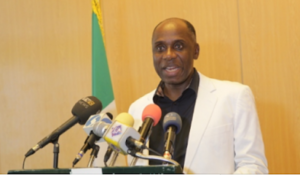 Kayode Ajulo, a human rights lawyer, says Rotimi Amaechi, former minister of transportation, is not eligible to contest for the 2023 presidential election.

In a statement on Friday, Ajulo said section 137 (1)(i) of the 1999 constitution prohibits Amaechi from running for office owing to the allegation of N96 billion fraud against him.

Nyesom Wike, Rivers state governor, had set up a seven-man panel to probe Amaechi over the alleged withdrawal of N96 billion from the state’s treasury during his tenure as governor.

The panel was said to have indicted some persons, including the former governor.

Amaechi then filed a lawsuit against the decision of the panel and the panel itself. The suit went from the high court to the appeal court and to the supreme court.

The supreme court on May 27, dismissed the appeal and ordered Amaechi to pay N1 million to the respondents.

The apex court, however, held that panels of inquiry are not judicial institutions and do not have the powers of a law court to adjudicate over issues or indict. The court described them as ”merely investigative”.

According to Ajulo, the All Progressives Congress (APC) will be taking a great risk by handing over its presidential ticket to the former minister.

“It is a well-known fact that Rt. Hon. Rotimi Amaechi is one of the presidential aspirants of the APC and as such, the indictment and the subsequent White Paper with recommended prosecution as well as the judgement of the supreme court touches on core objectives of the APC party to produce the next president for our great country Nigeria,” Ajulo said.

“According to Section 137 (1)(i) of the 1999 Constitution of the Federal Republic of Nigeria (as amended): Anyone that “has been indicted for embezzlement or fraud by a Judicial Commission of Inquiry or an Administrative Panel of Inquiry or a Tribunal set up under the Tribunals of Inquiry Act, or a Tribunals of Inquiry Law or any other law by Federal or State Government which indictment has been accepted by the Federal or State Government respectively”…… stands disqualified to be sworn in as president of the federal republic of Nigeria.”

“Therefore, though Hon. Rotimi Amaechi has not yet been tried by a law court in respect of the accused fraud and embezzlement, the provision of Section 137 (1) (i) of the 1999 Constitution has already disqualified him.

“The APC party will be taking the risk of handing over power to the next candidate with the highest votes if they put Hon. Rotimi Amaechi forward as their flag bearer and he wins.

“Likewise, the option of also handing him over as the vice president will not fly as the APC Party will suffer the menace of the same ill fate that befell the APC governor-elect of Bayelsa state in 2020, Hon. David Lyon who was disqualified by the supreme court on the basis that his deputy Hon. Biobarakuma Degi –Eremienyo presented false information to INEC to aid his qualifications for the state’s governorship election, this is a clear reinforcement that the ticket is a joint ticket and the disqualification of one member of the ticket disqualifies the joint ticket; a fate far too costly for the APC party to bear at the national level.

“Committing to mind that the presidential race for the election year 2023 has been picked up by all and sundry, other political opponents will very much ecstatic to see APC commit this grave error.

“It is apposite that the APC party takes all necessary steps to ensure that due diligence is carried out on all the party’s presidential candidates. The future of our great nation Nigeria is in our hands to mould, mend and take to greater heights and it will be most regretful if this opportunity is lost on issues that are avoidable.”