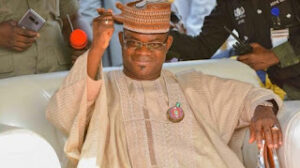 At the meeting, he asked them to “come up with a formidable” consensus candidate before the party holds its primary election.

The Kogi governor, who is also a presidential hopeful, said he will support Buhari’s choice.

Asked if Bola Tinubu, former Lagos governor, was also in agreement, Bello said he was present and did not object.

“He was seated in the meeting and he did not object to it, so If someone speaks on your behalf and you did not have anything in contrary and you keep quiet then it is binding on you,” he added.

Furthermore, Bello said the position of the northern APC governors on zoning the presidency to the south is non-binding.

The Kogi governor described the decision as “self-opinion”.

The northern governors had on Saturday expressed support for power shift to the south.

Bello said the development is a “recipe” to further divide the country along ethnic and regional lines.

“Going by that statement, if assuming, without conceding, that such statement came from some of my colleagues, it is just self-opinion,” he said.

“Let me quickly sound a note of caution to all Nigerians and advise some of my colleagues who may take it or leave it, that this is just a recipe to divide the country further along ethnic or regional lines.”