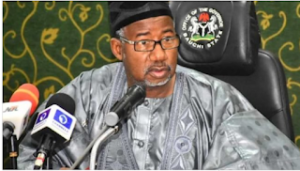 Bauchi State Governor, Bala Mohammed, has declared that he would give his unflinching support to the candidate of the Peoples Democratic Party, Alhaji Atiku Abubakar, to win the presidential election in 2023.

This is despite his refusal to step down for Atiku during the last party primary. Governor Bala Mohammed was among those who contested the presidential primary election of the PDP.

While Sokoto State Governor, Aminu Tambuwal, stepped down for Abubakar a few hours to the primary election and asked his supporters to vote for him, Mohammed on his part, did not step down but went into the contest and came out the fourth with only 20 votes.

Speaking on Monday at the Executives Chamber of the Government House, Bauchi, while inaugurating a Reconciliatory Committee mandated to meet and reconcile aggrieved individuals within the party, the governor said that though he failed to get the ticket of the party, he was, however, victorious having made history as the first person in the state to contest the presidency after the death of Nigeria’s first and only Prime Minister, Abubakar Tafawa Balewa.

“I am receiving today, the executives of the party who are here on a congratulatory visit over the dual success that I recorded. Since the demise of the late Prime Minister, nobody from Bauchi State ever came out to contest for the office of the President except me; with that, I have made history and that in itself is a victory for me. We have taken it to be God’s making and we have accepted it in good faith, he gives power and he takes it away. The campaigns we did for the presidential ticket, we did it with God’s permission and to us, we were victorious.

“I really cherish that position in recognition of the support that you gave me over the period. The support has been mixed, many people didn’t want me to go because they wanted me here (in Bauchi as governor) and it was all out of love; others wanted me to go so that I can represent this section of the country and the country at large because of the capacity I have developed over the years. We know that power comes from God, and what he has given us, we really cherish it because we are better informed and they say, participation in politics is the best teacher that anybody can get.

“And I must also thank you for giving me yet another opportunity to be your flag bearer as a gubernatorial candidate. This has shown the kind of synergy, fraternity, and brotherhood that we have. There was no dissenting voice, even the gentleman who stepped down for me, I must thank him most sincerely, that is the Secretary to the State Government, Alhaji Ibrahim Kassim, for being so magnanimous.

“Of course, he had the option of saying no, it is his own right, but it was within his own volition, I didn’t even ask him, he decided on his own despite the doubting Thomases and treacherous and mischievous people saying a lot of things and even playing the kite in the social media that he was not stepping down. It was all lies and you can see what happened, I thank him most sincerely, I will never take his love and appreciation for granted. I must also thank the delegates for standing by me all the way,” he said.

The governor added, “You can see that losing is part of democracy. I have lost but I have taken it in good faith. I am calling on others who lost like me as I lost in the presidential primary to take it with humility, to take it with a strong faith in God. There was a lot of horse-trading, a lot of permutations, and even insults unleashed on each other, but we have to forget all these because we have to forge ahead.

Mohammed, while stating the term of reference for the committee, one of which is to reach out to all those who contested, those who won and those who lost declared that there is no victory, and no vanquish, urged them, “You must appeal to appeal to their political sensibilities and their other side, that is, their fate, to appreciate whatever our people have decided. The delegates decided and they are the representatives of the people, we must appreciate and take it in good faith.

“And they will form a sub-committee to reach out to the other side who wish to come into the party because it is a darling today, they are welcome. You must make sure that nobody leaves the party even a single person. We want to go together as a state and as a government, we want to make sure we put aside all disparaging issues, issues that are based on lies, issues that are just based on political gimmicks.”

The Committee which has four weeks to carry out its assignment has Senator Adamu Kariya as Chairman while other members are Abdulkadir Doguwa, Umar Ningi, Mohammed Danbaba, Bappa Disina, Abubakar Faggo (Secretary of the Committee), Abdullahi Yari, Abdon Gin, Simon Balewa, Sanusi Sarkin-Aska, and Abdullahi Musa.