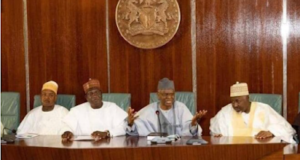 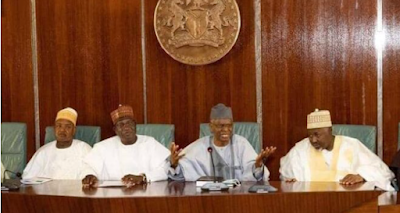 Nasir el-Rufai, governor of Kaduna, says Yahaya Bello, Kogi governor, “excused himself” from a meeting of northern governors of the All Progressives Congress (APC) with President Muhammadu Buhari.

El-Rufai said this at a media briefing on Monday after the governors concluded their meeting with Buhari.

Addressing journalists, el-Rufai said 13 of the 19 APC governors from the north agreed that the party’s presidential ticket be zoned to the south.

The Kaduna governor, however, said Bello, who is an APC presidential hopeful, decided not to attend the meeting.

According to el-Rufai, the Kogi governor is against the decision of his colleagues on zoning the presidential ticket to the south.

“The governor of Kogi state chose to excuse himself from meeting with Mr. President because he believes that he does not agree with our position,” el-Rufai said.

“There are 14 APC governors out of the 19 northern states. Thirteen of us are on one page on this subject and we all came to see the president. But the governor of Kogi state excused himself, and it is within his democratic rights to excuse himself.”

Meanwhile, in his remarks, Atiku Bagudu, chairman of the progressive governors’ forum (PGF), said it will be in the interest of peace to zone the presidential ticket to the south.