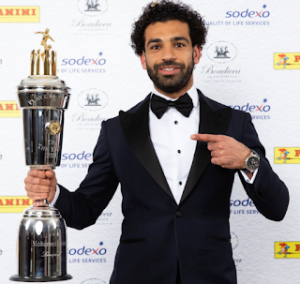 Liverpool forward, Mohamed Salah has been named the PFA Player’s Player of the year – his second.

He was beaten to the award last year by Manchester City’s Kevin De Bruyne and he returned the favour this time around.

Salah won the award after an exceptional season where he finished joint top scorer of the Premier League, reached three major finals and led Egypt to the final of the Africa Cup of Nations.

He shared the golden boot with Tottenham’s Son Heung-min

The PFA award is voted for by current and former professional footballers.

Salah on winning this year’s award said, “It’s great to win trophies, individual or collective. This one is big, so I’m very happy and proud of it.”