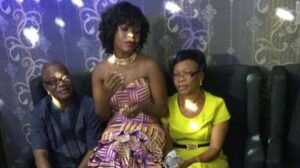 A lady who lost both parents in the Owo Church attack has shared her heartbreaking story.

Identified as Laide Ajanaku, she lost her parents, John Adesina Ajanaku and Olabimpe Susanah Ajanaku in the ugly attack.

Speaking with CNN on Monday, she said:
“We heard it was an explosion at first, then we started panicking and calling everyone for information. Somebody had my dad’s phone.
I still don’t know who that person was. The person picked up and said my dad had been injured and had been taken to the hospital, but he didn’t know anything about my mum’s whereabouts. He later said my dad didn’t make it. We eventually got through to a priest friend who confirmed that my mum had died as well.”
Ajanaku said her parents’ bodies were later identified at the morgue. Her father John Adesina Ajanaku, 67, and mother Olabimpe Susanah, 64, never missed church on a Sunday, she said.
“They never missed Mass. My dad was a knight and the chairman of the Catholic Men Organization. He was very religious and doctrinal. There was no doubt in my mind that they had witnessed the attack at the very least, but I didn’t know that they would be so affected,” Ajanaku said, adding that the church can hold about 500 people when full.
Ajanaku said her parents were always together, even in death. She said she wasn’t surprised they died together, as one couldn’t live without the other.
Close to 50 people, including children” were killed after attackers stormed into St. Francis Catholic Church in the city of Owo on Sunday, June 5 and began “shooting sporadically.”

Veteran actress, Idowu Philips, aka Iya Rainbow, said she wept when her son built her a house. In an interview with...

As much as men love being with women, there are certain traits they exhibit that turn men off. These might cause...

Tonte Ibraye, the Governorship candidate of the African Democratic Congress (ADC) in Rivers for the 2023 governorship election in the state...