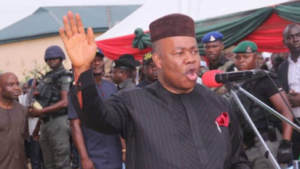 The Independent National Electoral Commission (INEC) says its officials did not monitor any primary that produced Godswill Akpabio as senatorial candidate for Akwa Ibom north-west.

Akpabio, former minister of Niger Delta affairs, had contested the presidential ticket of the All Progressives Congress (APC), but he withdrew from the race on June 7, and asked his supporters to back Bola Tinubu, former Lagos governor.

Prior to the presidential primary, on May 27, Udom Ekpoudom, a former deputy inspector-general of police (DIG), had won a primary organised for the Akwa Ibom north-west senatorial ticket.

However, a parallel primary was also conducted which was won by Ekperikpe Ekpo, but which was said to have been later cancelled over irregularities, while a rerun was conducted on June 8, with Akpabio declared as winner of the exercise.

Speaking on the development on Sunday, Mike Igini, resident electoral commissioner (REC) in Akwa Ibom, said INEC officials did not monitor any primary outside the one conducted on May 27.

“Senatorial primary was conducted on the 27th of last month. Was he an aspirant on that day? The answer is no. And the report of that day has been written since,” he said.

“That event has taken place and concluded before the presidential thing came up. He’s the one people should be asking questions if he participated in that primary. INEC is not involved in the conduct of party primaries. We are just an observer.”

Meanwhile, Jackson Udom, chief press secretary to Akpabio, in a statement on Sunday, said whatever primary that produced Ekpoudom was organised by the faction loyal to Akpanudoedehe.

“Therefore, that contraption that purportedly conducted the senatorial primary, where Udom Ekpoudom, was allegedly declared a ‘winner’, is not known to law and he couldn’t have been said to have won the party’s ticket, because you cannot build nothing on nothing,” the statement reads.

“The Akwa Ibom North West Senatorial District primary, as directed by the national leadership of the party all over the country, was conducted on 28th May, 2022, and not on the 27th May, that the Udoedehe contraption purportedly conducted its phantom primary.

“For even claiming to have conducted its primary on the 27th instead of 28th May, 2022, indicates the fact that their purported primary, was not done as provided for by the APC approved schedule.

“At the 28th May, 2022 primary, former member, House of Representatives, Rt. Hon Ekperikpe Ekpo, emerged the winner. That was the only recognised primary by INEC, because it was organised by Electoral Officers sent from the party’s headquarters.

“It was that same primary won by Hon Ekperikpe, that was later cancelled by the national leadership of the party, citing security infractions caused by hoodlums and miscreants who disrupted the exercise and a fresh primary ordered.

“At the fresh primary, DIG Udom Ekpoudom, Hon Ekperikpe Ekpo, Senator Godswill Akpabio and Engineer Joseph Akpan, all took part in the election. However, before the commencement of voting, Hon Ekpo, who won the cancelled election, voluntarily stepped down for Senator Akpabio. He there and then, called on all his supporters to cast their votes for Senator Akpabio.

“The reordered primary took place on the 9th of June, 2022, at the Skill Acquisition Centre, Ikot Ekpene, Akwa Ibom State. At the end of the election, Senator Akpabio was declared winner and returned as duly elected candidate for the Ikot Ekpene Senatorial District on the APC platform.”

The development also comes hours after a report by INEC had indicated that Akwa Ibom APC didn’t conduct any governorship primary monitored by the commission.