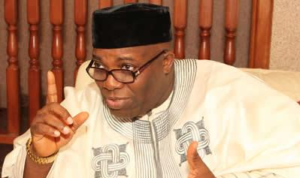 The Special Assistant on Media and Publicity to former President Olusegun Obasanjo, Dr Doyin okupe has said that he is the temporary vice presidential candidate of Labour Party, LP.

Okupe while fielding questions from Seun, a presenter with Channels Television, on a political programme –  Politics Today, which was closely monitored by NigerianEye said that his name has been submitted to the Independent National Electoral Commission, INEC, by his party.

“I stand in as the vice presidential candidate of the party. “Labour party has submitted my name as the VP of the party”, he said.

He continued “We are currently speaking with a lot of other political parties like NNDP, SDP, PRP and many others that represent the third force, we can substitute the name for the VP slot after the consultations are made”

NigerianEye recalls that Friday June 17 is the deadline for the submission of names of vice presidential candidate of all political party involved in the general elections, and Doyin Okupe’s name was most likely submitted as VP just to beat the INEC deadline while consultations are ongoing between Labour Party and other parties to provide a VP that will stand in at the 2023 polls.