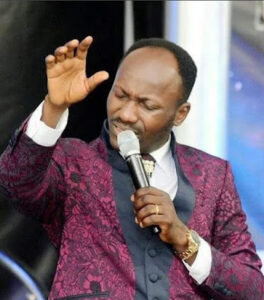 Apostle Johnson Suleman of Omega Fire Ministry has said some youths are looters in training.

Suleman said this while reacting to a viral video of some youths in Ekiti celebrating after they sold their votes during the state governorship election on Saturday.

The cleric said that not all youths are leaders of tomorrow as their activities do not in any way show their readiness to be real leaders.

Recall that there were several reports of massive vote-buying and selling during the just concluded governorship election in Ekiti State.

The Economic and Financial Crimes Commission (EFCC) had reportedly arrested an APC agent over his plan to buy the votes of electorates during the election.

He was arrested with a bag of cash while trying to induce voters.

Reacting, Suleman said it is obvious such persons are not ready to make Nigeria better.

He wrote: “So in the just concluded Ekiti State election, some youths were selling their votes?.

”I have always said it, not all youths are leaders of tomorrow, some are looters in training.”