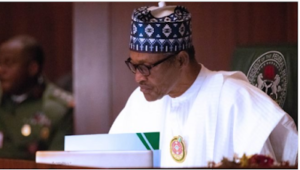 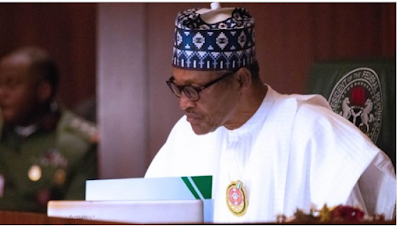 President Muhammadu Buhari says around $386 million was recovered in 2021 through the whistleblowing policy enacted by his administration in attempts to repatriate looted funds back into the country, and curb corruption.

Buhari said this on Tuesday in an interview with Bloomberg.

Buhari spoke on the performance of his administration in the area of economic growth, security, and corruption since 2015 when he was elected president.

He said through the whistleblowing policy, established in the first year of his government, hundreds of millions in stolen funds have been returned to Nigeria.

He said the recovered funds were reinvested in infrastructure development and social welfare.

“As an illustration, monetary recoveries (January-December) 2021 show that more [than] N152 billion has been recovered. Dollar recoveries for the year amount to over USD 386 million; GBP, more than 1.1 million; Euro, about 157,000; Saudi Riyals about 1.7 million some more in Digital and other currencies,” Buhari said.

“Working with our international partners, hundreds of millions of various currencies have been returned from abroad – primarily from the UK, US, and Switzerland – and used as social and welfare funds distributed directly to the poorest during the Covid pandemic and the provision of long-delayed infrastructure — roads, bridges, rail, and power.

“Those partners refused to return these monies held for decades to previous Nigerian administrations in the certainty they would simply be re-stolen. They changed their approach with us because they knew my administration could be trusted.”

Responding to questions on food security, and inflation, which currently stands at 17 percent, Buhari said despite programmes to boost domestic production, Nigeria still does not grow enough.

“Imports have fallen to near zero. We are making progress,” Buhari said.

“Against these advances, international trade remains rigged against food security in Africa. The EU’s policies in particular are all rhetoric of open trade – yet their common agricultural policy subsidy programmes and export of those subsidized goods create dependence, undermine Africa’s self-sufficiency, and cause food poverty and starvation.

“If only out of enlightened self-interest the West – and particularly Europe – must step up. The moral if not economic case for doing so is unarguable. Do nothing, and more migrants from across the Sahel will attempt dangerous journeys to reach Europe.”

On controlling the incessant borrowing of his administration, he argued that a narrow focus on debt misses the point.

According to Buhari, what it fills is Nigeria’s longstanding infrastructure deficit by constructing a foundation for sustainable growth — spreading opportunity to ensure no part of the country is left behind.

Buhari, who described infrastructure developments under his leadership as “most ambitious since Nigeria’s independence”, he said over 800 federal roads are being constructed or undergoing rehabilitation and 650km of rail line have been laid, helping alleviate food inflation pressures, given most food is produced in the north.

“Had the infrastructure gap not been filled, it will only grow, become more costly to repair what little we have while lacking more on infrastructure on which to build growth, negatively impacting progress towards UN Sustainable Development Goals,” he said.

Further speaking on boosting tax collection, Buhari, whose tenure will end next year, said while Nigeria is the largest economy in Africa, translating that wealth into revenue generation is challenging.

“We raised VAT in 2020, and the IMF wanted us to raise it further, but this is a complex issue that cannot be addressed by tax hikes alone. Around 80 percent of Nigerians work in the so-called informal economy – a situation exacerbated by the pandemic. It is difficult to tax the informally employed, and no country has yet found an adequate solution,” he said.

“Still, we are striving to find one, including the roll-out of a national ID card which has grown from 7 million in 2015 to between 90-100 million today – including a tax code and, at the same time, combined with access to various government services.”