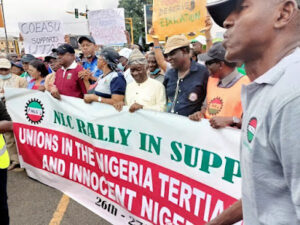 Nigeria Labour Congress has warned the federal government that the two-day nationwide solidarity protest by the union is just a first step, stressing that action would be reviewed next week for further strategy.

The Labour Union in Osun State on Tuesday joined the national body in a solidarity protest to end the Academic Staff Union of Universities (ASUU) strike.

ASUU has been on strike for almost six months.

The Vice Chairman of Osun State NLC, Awotayo Gbadebo said the national body will review the two-day protest if the federal government does not yield to its voice.

They gathered at Ogo-Oluwa and moved to the Osun State Assembly where the Speaker addressed the protesters before they walked to the governor’s office.

While addressing journalists on Tuesday, Gbadebo who represented the state chairman of NLC, Comrade Jacob Adekomi said the government is toying with the lives of students with the incessant strike.

He proposed an act of law that will stop public office or politicians from sending their children abroad for education to tackle incessant strikes and other problems facing education in Nigeria.

“Our children’s future have been toyed with because of the incessant strike. Obafemi Awolowo and other leaders gave these people free education. We want the government to open our schools today. This two-day protest is the first action and will be reviewed by National Working Committee next week.”