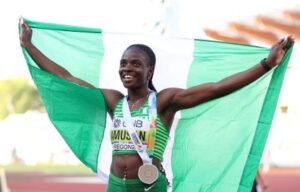 Tobi Amusan is a Nigerian athlete and sprinter.

Here are some things to know about her.

2. She came from a disciplined background and her parents were both school teachers.

3. She is the last of three children.

4. From an early age, she showed a lot of potential in athletics enjoying a great deal of support from her mother.

5. Her athletic journey began at age 15 when she won the 100m competition at her school’s inter-house competition.

6. In 2013, she qualified to compete for Nigeria at the African Youth Championships coming home with a silver medal.

7. In the same year, she was disqualified at World Athletics U18 Championships in Donetsk, Ukraine, for lane infringement during the 200m semi-finals.

8. Amusan was excluded from competing in the 4x100m relay squad at the trials for the 2014 African Youth Games, she demanded to know the other events she could enter, and 100m hurdles was suggested to her.

9. She went on to win silver at the African Youth Games in Botswana in the same year, her second hurdles race.

11. Coinciding with the period she got a scholarship to study at the University of Texas at El Paso, United States, in 2016, Amusan tweeted that she would become a great athlete.

12. At the age of 19, Amusan reached the semi-finals of the Rio Olympics.

13. Amusan won gold at the 2018 Commonwealth Games in Gold Coast and later went on to become the African champion in Asaba, Delta State, in the same year.

16. She set an African record by winning the 2022 Diamond League event in Paris.

17. At the 2022 African Championships in Mauritius, Amusan won gold in the 100m hurdles as she defended her title successfully with a time of 12.57s.

18. She doesn’t party and doesn’t drink.

Blasphemous Remarks: Lalong Apologizes To Catholic Bishops Governor Simon Bako Lalong of Plateau State and the Director-General of the All Progressives...

A’Ibom Monarch To Die By Hanging For Murder

A’Ibom Monarch To Die By Hanging For Murder