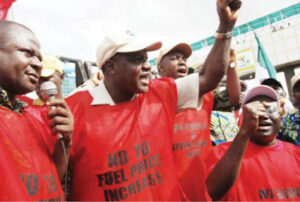 Specifically, the NLC said the money the two major political parties – the All Progressives Congress and the Peoples Democratic Party – generated from the sale of forms to aspirants could address ASUU’s demands.

In Akwa Ibom, Uche Nweke who represented the NLC National Chairman, Ayuba Wabba, faulted excuses that there were no funds to meet the demands of the university workers.

“The money the two major parties realised from the sale of nomination forms would be enough to put ASUU, universities on their feet. We the Nigerian workers are the most understanding people. We call on the national leadership to listen to voice of reason, whatever it takes they should send our children back to school” he said

The Minister of Labour and Employment, Dr. Chris Ngige, last week had claimed that a security report also sent to his office by the Department of State Services, strongly warned against holding the protest.

Also, Ngige had in an interview with Channels Television in March said government did not have money to meet ASUU’s demands, which included revitalisation funds for universities.

He stated, “The N1.3trillion you are talking about was promised by the (Goodluck) Jonathan government. Oil was selling between $100 to $120 per barrel then and the revenue of the federation was rich.”

However, the unionists expressed their anger over the Federal Government’s inability to address their grievances, adding that it had become necessary for the current government to leave.

The university lecturers had shut down public institutions on February 14 over the inability of the Federal Government to implement the agreements it made with ASUU in 2009 as well as the refusal of the current administration to exempt lecturers from the Integrated Payroll and Personnel Information System.

ASUU had also asked the government to increase funding of tertiary institutions and pay outstanding allowances.

The NLC president during a chat with journalists in Uyo, Akwa-Ibom, had earlier said the protest would be against government actions that led to the strike.

The teeming protesters expressed their concerns in songs and placards, some of which read; “Stop importation of petrol. Revive the refineries”; “IPPIS destroys our refineries. Adopt UTAS now”; “Reduce the cost of governance. Save the masses from poverty and hunger”; “Stop the looting”, “Tax the rich and subsidise the poor”; among others.

“It’s been almost a year. Our children are still at home. An idle hand is the devil’s workshop. Children who are not engaged will become internet fraudsters and prostitutes,” she added.

“We are telling the government, enough is enough. Let them stop deceiving our people, they have money. Buhari should collect money from 10 looters to resolve this problem. Just last week, one of them stole N119bn and others have stolen more.

“In Abuja, they are using dollars to pay delegates and are distributing millions of dollars under the Central Bank of Nigeria’s watch.”

Falana said rather than stay at home to fix the country’s problems, the President, Major General Muhammadu Buhari (retd.), continued to engage in irrelevant travel like his recent trip to Liberia.

The protesters, who marched from the Ikeja Bridge to the Lagos State Governor’s office, submitted a letter – which contained all their demands – to the governor

The Commissioner for Establishments, Training and Pensions, Mrs Ponle Ajibola, received the letter from NLC Chairman, on behalf of the Lagos State Governor, Babajide Sanwo-Olu.

Others who took part in the protest were: The Joint Action Committee of the Senior Staff Association of Nigerian Universities and Non-Academic Staff Union of Allied and Educational Institutions, Nigeria Union of Teachers, The Radio, Television, Theatre and Arts Workers’ Union of Nigeria and other affiliate unions of NLC were at the protest.

The NLC President, Wabba, also said that the workers’ union would embark on a three-day nationwide strike should the Federal Government fail to accede to the demands of ASUU after the ongoing two-days warning protests.

Wabba who spoke in an interview with Channels TV, also stated that the workers’ union embarked on a two-day protest against the ongoing ASUU strike not just as a show of solidarity, but because the strike directly affects the NLC.