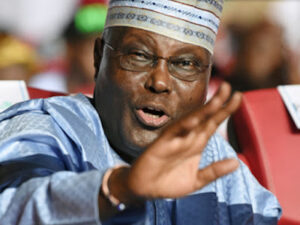 Presidential candidate of the Peoples Democratic Party, Atiku Abubakar, has charged members of the party at all levels to change strategy in order to ensure the party wins the 2023 general elections.

Atiku gave the charge at an event organized by a youth group, PDP New Generation, in Abuja, today.

He noted that unlike in the past where people sat in their comfort zones and expect victory, the new system demands that people go down to their polling units and participate actively by ensuring their votes count.

Earlier, the Vice Presidential candidate of the party, Governor Ifeanyi Okowa explained that at difficult times like this, Nigeria requires a tried and tested hand to take the nation out of its challenges.

He said, “In troubles times such that we have today we need the guidance of those who have been tested , men with nationalistic personnel to secure and not destroy us and prosper our people yet again.” Okowa said Atiku is that man.

Also, the National Chairman of the PDP, Sen. Iyiochia Ayu said, “We will not relent in the rescue effort because I’m very confident they come May next year, there will be a brand new team led by President Atiku Abubakar.

Speaking in a similar vein, the Deputy Governorship candidate for Cross River State, Emma Amawhe, called on Nigerians across board to shun divisive narratives.

She enjoined political and religious leaders to join hands to heal the rifts between communities and build bridges across divides.

The youths on their part said they were targeting at least 5 million votes for Atiku.