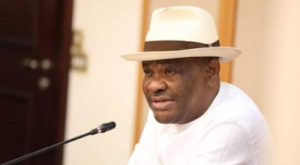 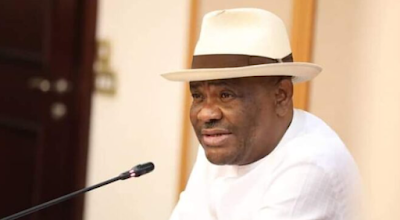 Nyesom Wike, governor of Rivers, says if he has the opportunity, he will successfully tackle banditry.

Wike said this on Tuesday at the inauguration of the dualised Ogbunuabali-Eastern bypass road in Rivers.

The road was inaugurated by Aliyu Wamakko, former governor of Sokoto, who is a member of the All Progressives Congress (APC).

Wike said Nigeria’s problems can be effectively addressed if leaders are truly committed to serving the people, adding that his resolve to deliver effective governance would not be in doubt even if was not a member of the Peoples Democratic Party (PDP).

“Leadership is not about party, leadership is about the individual. Party is only a vehicle to actualise your ambition, to be able to tell your people ‘I have this capacity; I have this quality to render services to you’,” he said.

“I challenge everybody. The problem we have in this country today is that we don’t have people who have that passion, who want to serve their people.

“But this one I have, I will use it and serve my people so that they will be happy and know that they deserve the best. ”

Wike’s remarks come amid increasing attacks related to banditry and insurgency across the country.

Meanwhile, there have been speculations that the Rivers governor may not support Abubakar following his loss of the party’s presidential and vice-presidential tickets.

Although there have been fence-mending meetings towards resolving the friction in the party, Wike’s recent comments seem to indicate that the crisis is far from over.