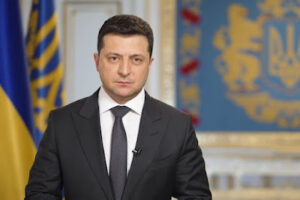 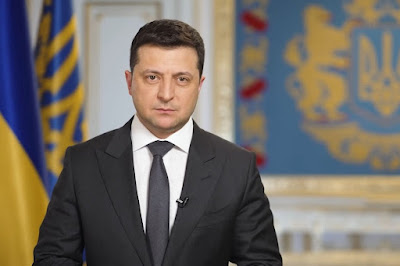 Volodymyr Zelenskyy, president of Ukraine, says African countries should be unanimous in their support for his country in the ongoing war against Russia.

Russia invaded Ukraine on February 24, 2022, and the war has resulted in killings, displacement of millions of people, food insecurity, and energy crisis.

In April, the United Nations general assembly adopted a resolution to suspend Russia from the human rights council.

However, during the voting process, 58 countries — including African countries like Nigeria, South Africa, Cameroon, and Niger Republic — abstained from participating in the exercise.

Speaking at a recent interview with journalists from Africa on how countries can support Ukraine, Zelenskyy said the situation doesn’t call for nations to take neutral positions, considering the far-reaching consequences of the war.

“First, you should understand and the world should know the truth that Russia is waging a colonial war against Ukraine. This war is going on in our territory, absolutely and only in Ukraine. What Russia is doing here is the same as racism, the same as Nazism, and a new word has been coined for its practices – ruscism. That’s what it is,” he said.

“Nazis believed that there was only one great nation — Aryan — and this wrong belief led to a great tragedy. The same thing happens with ruscism. They believe that there is a ‘Russian world’. They do not respect us, and they do not respect our territories, our people, or our language.

“They believe that we do not exist — that 40 million Ukrainian people do not exist. They believe we are wrong Russians. A great tragedy of capturing other territories, people, torture, and deportation of children is happening.

“We are similar in many ways — what happened on the African continent is still happening elsewhere. For a long time, the world did not care, and this is wrong. We’ve been saying this all the time; we, the people who have been going through war for eight years.

“It’s not a faraway war. What is happening in Ukraine has been happening for many years in many places on the African continent. This injustice is absolute, and the security infrastructure of the whole world needs to be changed. These international institutions need to be changed for them to work. And we stand for it.

“Today we are a tragic living example of the world security system being broken. And we invite everyone to repair it, to guarantee security for Ukraine. This experience can then spread to other continents and states that lack security and peace.

“But I should admit that some countries on the African continent lacked attention. We in Ukraine had begun changing this policy before the start of a full-scale invasion on February 24. And in spite of the lingering war, I appointed my representative on the African continent — we want to expand our ties. It is very, very important for us. We also want to find various areas to invest in.

“Despite the ongoing war, our foreign affairs minister is planning a big trip to the countries of the African continent in the autumn. I cannot do it now, as I had planned before the war, but I am sure I will do it when it ends. It is important, and I will gladly do it.”

He also said Africans may wonder why Ukraine deserves their support, adding that with the input from African leaders, issues such as food crisis which has had significant effect on African countries can be addressed.

“People in some countries of the African continent may wonder: ‘If the world did not help us, then why should we help Ukrainians now?’ They should support us because they know how it hurts when the world does not pay attention to your problem, war, or poverty,” he said.

“That’s what is happening here. Those who are going through, or have gone through this pain, know what it’s like to be ignored. Therefore, on the contrary, they should speak out and support.

“We know and are ready to supply all countries with grain and wheat, because hunger is not neutral. Hunger comes to the country, no matter what stance the state had had before the war. It is about famine, and it is about the fact that people will die.

“I know that we can help the countries of the African continent without dividing them, just as they should unite to support Ukraine, because we have the truth on our side; because we are a peace-loving country; because the war is on our territory, not on the territory of Russia.”