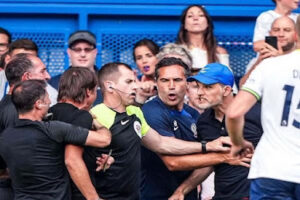 Chelsea manager, Thomas Tuchel, has said the two goals Tottenham Hotspur scored in their 2-2 draw on Sunday, should have been ruled out.

The Blues thought they had taken all three points after Reece James drilled past Hugo Lloris, but Harry Kane headed in a late equalizer.

Speaking to Sky Sports after the game, Tuchel insisted both Spurs’ goals should not have stood.

According to him, Havertz was fouled in the build-up to the first, before Richarlison blocked Eduoard Mendy from seeing Hojbjerg’s shot.

“I have to say both [Spurs] goals cannot stand.

“It was a clear foul on Havertz in the build-up, a clear foul. We had one tactical foul from James which got a yellow. I don’t know how many tactical fouls Hojbjerg and Bentancur did today. The situation went on and on, and it was a clear offside on Richarlison. He is in line of the shot. He even goes to the ball, so Mendy can’t see the ball. The check it, it is a clear offside.

“And when can you pull hair on the football field? When is that? So we check and nothing happens, so we don’t need to check no more. It’s ridiculous,” Tuchel said.