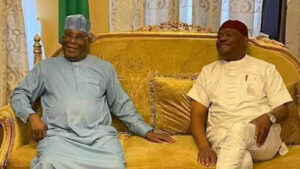 A group, identified as the Peoples Democratic Party (PDP) Frontliners, says Atiku Abubakar, presidential candidate, may lose the election in 2023 if the crisis in the party is not addressed.

During the presidential primary held in May, Abubakar defeated Nyesom Wike, governor of Rivers, to secure the party’s ticket.

Wike was also said to be the preferred candidate of a majority of members of the national working committee (NWC) for the vice-presidential slot, but Abubakar had chosen Ifeanyi Okowa, Delta governor, as his running mate.

In a statement issued on Saturday, the PDP group said the former vice-president is being misled by people who do not mean well for the party.

The statement was signed by Hussein Mohammed, Moses Abidemi, and Dan Okafor, the group’s president, secretary and publicity secretary, respectively.

“The current situation will make Atiku to snatch defeat from the jaws of victory,” the statement reads.

“There are mischief-makers in Rivers state who are actively working with mischievous anti-Wike party elements in Abuja.

“Daily, you hear fabricated ‘news’ that Wike has pulled down all PDP flags in Rivers state or that he has kicked out party elders in the state but these are largely the machinations of disgruntled souls from the geo-political zone.

“It came at a time when every lawyer and knowledgeable Nigerians know that the constitutional deadline for such has been exceeded.

“Someone like Governor Nyesom Wike, who has sacrificed a lot to keep the party together and forge a way forward through moments of grave uncertainties, is now being ridiculed and somewhat alienated by a few party leaders.

“A stitch in time saves nine; the sooner we resolve our differences and come together towards claiming genuine victory in 2023, the better it would be for PDP and the entire people of the federal republic of Nigeria who are now tired of the burdens of unprecedented unemployment, inflation, insecurity, and other woes that the ruling party has brought in place of its utopian promises of 2015.”