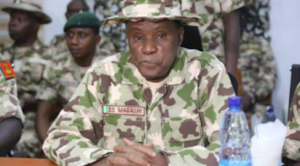 Bashir Magashi, minister of defence, says security challenges in the country will soon become a thing of the past.

The minister spoke on Saturday at an event organised by the International Institute of Professional Security (IIPS) in Abuja.

Represented by Adeyemi Yekini, chief of defence training and operations, Magashi said the strength of the military has increased while the tactics and procedures have been reviewed.

“In the armed forces, we have increased our strength as much as possible, reviewed our training tactics and procedures and reviewed our order of battle,’’ NAN quoted him as saying.

“Terrorism as we all know is always enduring; ending it may not be as quick as one may expect. I can assure you, however, that we are on top of the situation and in the shortest possible time, all these challenges will become a thing of the past.”

The minister said the recent arrest of the terrorists responsible for the June 5 attack on St. Francis Catholic Church in Ondo state, demonstrates that the military offensive is yielding result.

He said the improved cooperation between the military and other security agencies has helped to flush out criminals from their hideouts.

Magashi said more than 70,000 terrorists and their families have surrendered to troops in the north-east while thousands of displaced persons have returned to their homes.

He added that the military will synergise with other securities agencies to free the south-east, south-south and south-west of all forms of criminality.