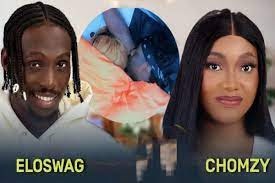 The model defeated the remaining 19 housemates — with the exception of the incumbent HoH — to clinch the title on Monday evening.

Unlike the previous weeks, the housemates were asked to play to win individual immunity for themselves as the levels system in the house was recently scrapped.

After the live eviction show on Sunday, the instructive voice behind the show announced that the housemates in the two levels should merged together and stay in one house.

The first challenge which was played in two rounds — males and females separately — involved the housemates using their mouths to move donkwa’s from a bowl on one end to a plate on the other end.

A donkwa is a street snack that is made from maize and peanuts that are dried and roasted.

Chomzy and Bella came out as the best performing housemates. Most of the remaining contestants were disqualified for breaking the game’s rules.

They were then pitted against each other in the second challenge which Chomzy won after Bella was disqualified for breaking the rules.

With the victory, she has now secured immunity against possible eviction this week.

Chomzy chose Eloswag as the housemate to share Head of house privilege with and as such, Eloswag also gained immunity from this week’s eviction.

Phyna was also made the tail of the house for having the worst performance in the previous week’s HoH games. This was because she failed to follow up on the punishment given to her.

The winner of this year’s edition will go home with a grand prize of N100 million — the highest ever since the inception of BBNaija.