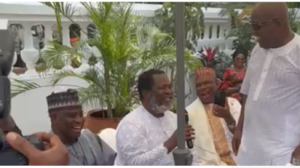 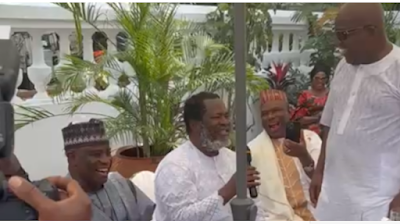 Nduka Obaigbena, founder of THISDAY and Arise TV, created time to taunt Nyesom Wike, governor of Rivers state, at the burial of his mother in Delta state at the weekend.

Obaigbena mocked Wike when he hosted some guests who attended the funeral of Margaret Obaigbena, his mother, on Saturday, in Owa-Oyibu, Delta state.

While hailing Aminu Tambuwal, governor of Sokoto, whom he described as the country’s “future president”, the THISDAY chairman said “Wike lule”.

Wike lost the presidential primary of the Peoples Democratic Party (PDP) to Atiku Abubakar in May.

Bola Tinubu, presidential candidate of the All Progressives Congress (APC), gave resonance to the word in an outburst before the party’s primary when he insinuated that there was a plot against him.

Tinubu said when President Muhammadu Buhari first tried to be president, ‘o lule’ (he fell flat) and he wanted to give up after the third attempt but he (Tinubu) went to tell him to run again.

The former Lagos governor then said it was his turn to be president after all he had done for Buhari.

At the party on Saturday, Shina Peters, the Afrojuju singer, gave the microphone to Obaigbena midway into his performance.

There is no love lost between Obaigbena and Wike as both of them are currently in court over allegations of libel.

The Peoples Democratic Party (PDP) has been in a crisis since it held its presidential primary election in May.

Atiku clinched the party’s ticket after the dramatic withdrawal of Tambuwal from the race. Tambuwal had asked his supporters to support the former vice-president.

The crisis in the party escalated after Atiku picked Ifeanyi Okowa, governor of Delta, as his running mate

Party stakeholders had expressed concerns that Atiku ignored Wike — who was said to have been preferred by a majority of the national working committee (NWC) members as the candidate for the position.

Despite meetings that have been held, Atiku and Wike are yet to broker a truce.