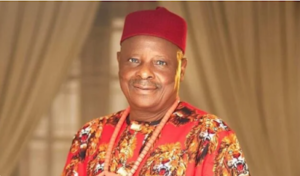 Aniebonam spoke in Lagos on Tuesday at a meeting with stakeholders in the maritime sector organised by Prime Maritime Project (PMP).

Aniebonam said part of NNPP’s major focus would be the maritime sector “where Igbos are the majority”.

According to him, a huge number of Igbo are into import and export of goods and services in the maritime industry, hence, the need to support the NNPP presidential candidate.

“My presidential candidate loves Igbo so much. With Kwankwaso, a lot of issues will be resolved,” Aniebonam said.

He said NNPP has been working quietly and setting up structures to create a new order in the maritime sector and the country.

Aniebonam urged the stakeholders to be part of the journey that will lead to the emergence of a new Nigeria.

“It is time for a new order in the maritime sector. We have a presidential candidate that does not have any baggage,” he said.

“We have a child of God to provide leadership in this country.

“Hold me responsible on the implementation of the social contract we are having with stakeholders in the maritime sector.”

Also speaking, Rufai Alkali, national chairman of NNPP, said the mission and commitment of the party is to liberate Nigerians and build a country everyone would be proud of.

According to Alkali, the party is ready to ensure that the issue of economy, security, poverty and others are taken care of.

“We are looking at Nigeria as a whole. A country where there will be inclusion and where no section of the country is left behind. NNPP is the fastest growing political party in Nigeria,” Alkali said.

“We need a better Nigeria for our children and grandchildren and that is what NNPP is all about, new party, new face, new direction to push the country forward.

“NNPP is not a regional party as being pronounced by some people, it is a party that will make sure that the issue of security, education and others are taken care of.”

In his address, Asu Beks, chief operating officer of Prime Maritime Project (PMP), said the sector is an integral part of Nigeria’s economy.

“Apart from being the gateway to the nation’s economy, the net worth of this sector is estimated at about N91 trillion and could boast of no fewer than N15 million eligible voters on election day,” Beks said.

“That makes us one of the most critical sectors both in terms of contribution to the gross domestic products and a sea of prospective voters.