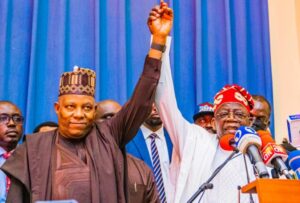 The All Progressives Congress (APC) Vice Presidential candidate, Kashim Shettima, said he will concentrate on fighting insecurity in the country if the ruling party is elected in next year’s presidential election.

Mr Shettima, who was a panellist at the just concluded Annual General Conference of the Nigerian Bar Association (NBA) on Monday in Lagos, said he would personally lead the Nigerian military against criminals while his principal, Bola Tinubu, will oversee the economy.

“I have been in the theatre of conflicts for 18 years, I will lead the troops, my principal is an economy wizard who has transformed Lagos into the third largest economy in Africa. He will concentrate on the economy.

Can the president lead the troops?

Mr Shettima’s comment which has been interpreted to mean he will act as the commander-in-chief if elected vice president, a role which is the constitutional preserve of the President or the acting president, has left Nigerians on social media wondering if he will usurp the role of his principal, Mr Tinubu.

According to Section 130(2) of the 1999 Constitution, the Nigerian president has the exclusive authority as the commander-in-chief of the country’s armed forces and not his deputy.

Other than the Section noted above, no section empowers a VP to lead a troop of any number or size.

Chukwunomso Ogbe, a political analyst and lawyer, noted that it is out of his place as a vice presidential candidate to aspire for the lofty right of a president.

He argued that the former Borno governor can only do what he said if his principal, Mr Tinubu, willingly passed such power down to him but not by his mere expression of passion to serve.

“If you have a VP that is ready and willing to take proactive security measures to protect the citizens and then you have a president that is not comfortable with that idea, the idea of that VP will never fly because he is a constitutionally recognised commander-in-chief. That is the provision of the law.

“With due respect to what the APC vice presidential candidate said, his statement is laudable but it is still subjected to the will and caprices of the president if his party wins the election.

“For Shettima, he is just contesting for a VP seat and even if they should win this election, he can only be a second in command and not the commander-in-chief. It is only a president, as a civilian, that can make his kind of statement with passion,” he told newsmen.

Another lawyer, Tunji Abayomi, said the statement of the APC VP candidate is being taken out of context.

He described Mr Shettima’s statement as an undue noise widely exaggerated to discredit his candidacy.

“His thoughts are mere proposals and contemplations. Constitutionally, it can be accepted and rejected by the commander-in-chief. That’s number one and I am quite sure that he spoke about his responsibility to his commander-in-chief, his principal.

“The second is that there is so much noise about nothing in my view. People saying he is laying the foundation to take over power. I think it is an undue exaggeration. Let’s even assume that he will be the commander-in-chief. Where a commander is under another commander-in-chief, the commander’s command becomes immaterial. We have nothing to worry about.

When reached for comments, the spokesperson of the presidential campaign of the main opposition the Peoples Democratic Party (PDP), Daniel Bwala, Thursday, described Mr Shettima’s comment as “a perfect picture of delusion of grandeur.”

He ruled out the possibility of a civilian ever leading Nigerian troops and mocked the APC VP candidate’s stance.

“That is a perfect picture of delusion of grandeur. Why would a civilian say he will lead the troops? If he is as passionate as he claimed, why didn’t he lead his troops as a governor when the Chibok girls were kidnapped?

“As a sitting Governor, he ignored all security reports and the counsel of against holding the 2014 May/June West African Examination Council (WAEC) at Chibok,” Mr Bwala said.

He accused the ruling party of deception, adding that Mr Shettima’s statement is a point to the kind of government the party intends to run if elected in 2023.

“Without crediting the statement to his principal, his statement means he is the de-facto president while Tinubu is just a placeholder.

“He gives an impression of insubordination and the kind of deceptive government APC intends to run if elected in 2023,” he told this newspaper.

The APC presidential campaign spokesperson, Festus Keyamo, did not answer his calls and text messages when newsmen reached out to him for comments on Thursday.