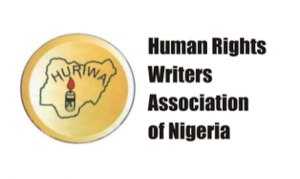 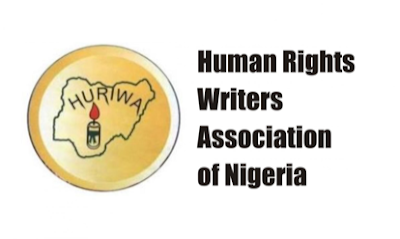 Human Rights Writers Association of Nigeria, HURIWA, has approached the National Assembly to urge the Committee on Public Petitions to institute a transparent and unbiased investigation of remote and immediate circumstances surrounding the alleged physical torture of the driver of the Honourable Minister of State for FCT, Mr. Idoko, by a mob watched by armed policemen at the National Secretariat of the ruling All Progressives Congress in Abuja recently.

HURIWA said it decided to take the bull by the horn by approaching the powerful Committees of the two Chambers of the National Assembly on Public Petitions to ask them to subject to scrutiny the clear refusal of the police authority to comply with the various human rights related provisions embedded in the extant 2020 Nigerian Police Act.

The rights group said it is shocking that the armed policemen allegedly participated in a lawless action by some persons at the National Secretariat of the ruling APC to illegally brand the driver a thief and therefore set him up for a lynch mob attack, which then compelled the entourage of the minister to intervene and rescue the poor driver from being illegally killed.

The prominent civil rights advocacy group said the decision to approach the National Assembly is because of the clear allegations that the police operatives at the APC’s national headquarters in Abuja may have instigated the mob to attempt to lynch the driver.

The rights group said it is seriously concerned about the alarming statistics that only in May 2022, 32 cases of jungle justice were reported in Nigeria.

The group noted that most of these mob actions have resulted in gruesome, inhumane torture and extra-judicial killing of people accused of committing an offence, adding that dozens have suffered death through beatings or burning even as many were innocent.

HURIWA recalled that the recent lynching of David Imoh in Lagos has once again centered jungle justice in the national discourse, leading to concerned citizens calling on authorities to make committed efforts to end this barbarous practice.

It said, therefore, that the emerging allegations that the minister’s driver was almost lynched with the alleged active connivance of the police operatives are a crime that the National Assembly should investigate.

HURIWA affirmed that mob actions have had a long history and predate Nigeria. It was pervasive in the United States as a tool white America used in terrorising its black population.

“This system of extra-judicial execution sometimes based on false accusations, such as the case of the Aluu 4, or on flimsy arguments like the dispute over a N100 change that cost Mr Imoh his life in Lagos, has become the bane of the Nigerian state and its woeful justice system,” the group said in a statement signed by its national coordinator, Comrade Emmanuel Onwubiko.

HURIWA cited a recent report that between 2020 and 2021, nearly 200 persons lost their lives in reported cases of jungle justice in Nigeria.

The group said it would be asking the Senate President to be personally interested in this instance, adding that the reported figure documents only cases reported in the media.

“While 83 deaths were recorded in 2020, the figure rose to 107 the following year. With rising hate, rising poverty and a staggering failure of the law and justice system in the country fears that the numbers will increase for 2022 are not misplaced,” it noted.

“In several instances, mobs have opted to dish out this form of justice because they mistrusted the law, law enforcers, and the justice process. This largely stems from a lack of diligent investigation and prosecution of suspects, the complicity of law enforcement in suspects’ escape from justice, and the painfully slow wheels of justice in Nigeria, with court cases dragging for years while thousands of suspects await trial.

“The cases have been exacerbated by state-sanctioned extra-judicial killings. In the early 2000s, state-backed vigilantes in the southeast, otherwise called Bakassi Boys, went on a public lynching spree of suspects after they were given free rein by the governors in the region to help curb crime. It was the clearest demonstration of the failings of the justice system up to that point.

“While these extra-judicial killings often drag out for hours, it beggars belief that the police are hardly ever at hand to stop them. In other instances, it would appear the police directly sanction the killings.

“The increasing spread of jungle justice in the country and recourse to it is a clear signal for authorities to wake up to their responsibility of ensuring law and order and upholding justice.

“These actions, if left unchecked, could trigger widespread conflicts, as demonstrated in the Dei-Dei market recently, where reckless driving and lynching led to a violent confrontation between different groups

“Authorities must act now before these extra-judicial killings and self-help ‘justice’ snowball into a dangerous avalanche that could consume thousands of lives and lead to a complete breakdown of law and order.”

HURIWA said it will also be seeking the actions of the National Assembly through her committees on Police Affairs to compel the men and officers of the Nigerian police to comply totally with provisions of the new Police Act, especially the provision compared to what legal authorities called “Miranda Warning” just as the new Act adopts the popular practice of informing the suspect before interrogation or arrest of his right to remain silent or avoid answering any question, until after consultation with a counsel or any other person of his choice.

HURIWA also expressed shock that the minister whose driver was brutalised, is being dragged to a phantom incident that a section of the media misrepresented as an assault on some media practitioners without referring to the wanton violations of the constitutionally protected human rights of the driver who could have been killed in the presence of many police operatives.