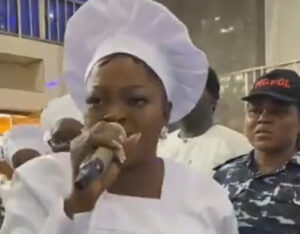 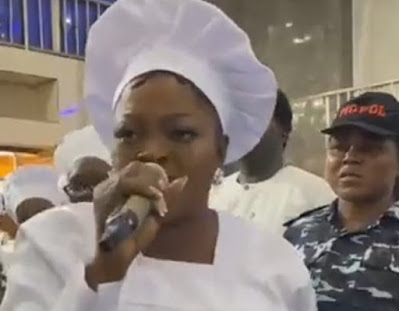 Funke Akindele, the Nollywood actress, says she will no longer be hiding her identity as a member of the Celestial Church of Christ.

In a video shared on social media platform by CCC Wonderland Parish, the actress turned politician revealed that she was born and raised in Celestial church.

Akindele, who is the Lagos state deputy governorship candidate of the Peoples Democratic Party (PDP), ahead of the 2023 election, also “likened herself to a lost sheep that God brought back home”.

The actress, who is seen in the video wearing a white garment, said before now, she only visits the church secretly and when she is in need of help.

The movie star, however, promised that she will henceforth publicise her membership.

“I was born and raised in Celestial. My situation is like a lost sheep that God brought back home. I’m well known in celestial parish in Mile 12, Alapere, Ojota; those are the places I grew up,” she said in a mixture of English and Yoruba.

“Everytime I have challenges I go back to Celestial church quietly and I go at night. And I would see that I get breakthroughs, but right now I said enough is enough. I have stop hiding, I have to be identified with the church publicly.

“I also want to advise everybody, anything you want to embark on, put it in the hands of God and if He doesn’t permit you to do it, don’t. Every steps I have taken in my life, I heard from God before I do it and I thank God I’m here today.

“I also want to beg you to pray for Funke Akindele everytime and everything that has to do with Funke Akindele. God should be with her, she shouldn’t die suddenly and she should be successful in all her endeavors.”