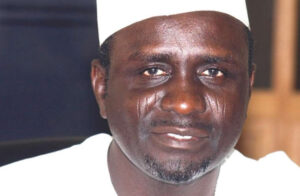 Former Kano State governor, Senator Ibrahim Shekarau (Kano Central) has explained that his decision to join the Peoples Democratic Party, PDP, was the final outcome of the Shura Committee formed by his supporters.

Shekarau explained that he is not after position or office, but working to protect his integrity, dignity and freedom as a citizen.

Delivering an address announcing his defection to the Peoples Democratic Party (PDP) on Monday, Shekarau added further that wherever he goes to and there are signs of lack of fairness and justice he will leave.

He publicly announced that he is no more the Senatorial candidate under the New Nigerian Peoples Party (NNPP) saying he and all his supporters have moved to the PDP.

“It is not office or position that we are interested in. It is our integrity, dignity and freedom that we are protecting.

“I have since  notified the Independent National Electoral Commission (INEC) of my intention to dump the Senatorial candidacy under the NNPP and completed the due processes.

“We told you our reason since we established a 30-members committee of the Shura members.

“They sat and came up with this decision we are announcing today(Monday),” he declared.