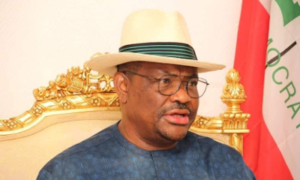 The Rivers State Governor, Nyesom Wike, Wednesday called on retired army generals to exploit their contacts with the American Central Intelligence Agency, CIA, to end terrorism in the country.

The fiery governor and former presidential aspirant of the main opposition Peoples Democratic Party, PDP, said this in Port Harcourt, Rivers capital while reacting to alleged threats from an unnamed retired army chief.

In his words, “Some people threatened that they are former generals, they are close to the CIA in America and they can deal with us.

“I said listen, no problem. If you are close to the American CIA, why don’t you use it to solve the Boko Haram problem. Is it on my body (me) you’ll use it?

“Nigeria has a serious problem and you are close to the CIA, you know them as former generals, why not use that contact and solve Nigeria’s problem.

“You want to use it to threaten me. Who are you that I should come and do your own biddings? I say no to that.

“No other child should come up outside them. I will not do that. So, all of us, prepare because a day shall come and Rivers State shall take a decision on what to do.”