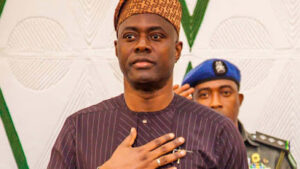 Makinde described the report as false and misleading.

Speaking through his Chief Press Secretary, Taiwo Adisa, Makinde said he was not in the State when the event happened.

Adisa said the report was aimed at confusing the people.

He said the governor was on leave and was nowhere near the State during the rally.

Adisa said Makinde would not accept falsehood from Obi’s supporters known as Obidient, adding that any attempt to drag the governor’s reputation would not be accepted.

The statement read: “Our attention has been drawn to an online publication, which indicated that Governor Makinde was spotted among the Obidients during a rally in Ibadan, on Saturday, September 3, 2022.

“For the avoidance of doubt, Makinde was nowhere near Ibadan when the said rally was held.

“How is it possible for the governor who was observing the last days of his leave outside the country to be spotted among the so-called Obidients in Ibadan?

“While we will not begrudge the Obidients’ desire to propagate their candidate, we will not oblige anyone the luxury of dragging the reputation of the Governor of Oyo State on accounts of false claims.”