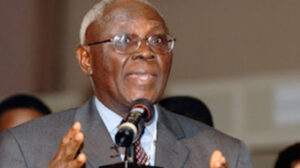 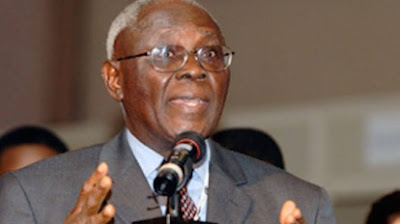 President Muhammadu Buhari has described the late Professor of Geography and Urban Regeneration, Akinlawon Mabogunje as a distinguished public policy expert, an advocate of good governance who was accessible, approachable and extremely humble to all who came across him.

The president stated this at the church service for the burial of the late renowned Geographer, held on Saturday, at Ijebu Ode.

Represented by his Chief of Staff, Prof. Ibrahim Gambari, Buhari noted that the late professor was a just man who throughout his life led by example.

He noted further that Mabogunje would live in the minds of many people as a great man for a long time, submitting that he was a decent man who served God with all his heart.

President Buhari, however, expressed his condolences with the family of the late professor, saying that the family should be glad that their late patriarch who lived an accomplished life was well celebrated and a cerebral educator.

In his remarks, former president Olusegun Obasanjo, who described the late professor of Geography as a distinguished man who lived and stood firm for his faith and belief, said that he combined total dedication and excellence in all national endeavors he was involved in.

On his part, the Ogun State governor, Dapo Abiodun, described the Pa Mabogunje as an erudite scholar, community leader, who loved his family, the people around him, disclosing that the late professor led other prominent indigenes of the town to start a fund to support and empower transporters, particularly tricycle riders.

“For all Baba has done for us in Ogun State, for this country, for making us very proud, we have decided that we will be naming a very prominent street in Ijebu-Ode in his memory. I have also discussed with the Chief of Staff to the President, I will also be writing to the president, humbly requesting that a prominent street in Abuja be named after Prof. Mabogunje,” Abiodun submitted.