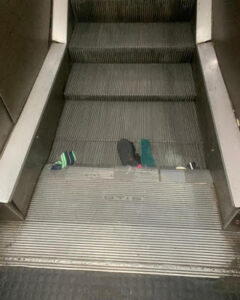 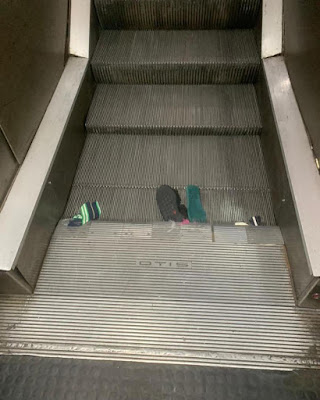 A Nigerian traveller has threatened to sue the Federal Airports Authority of Nigeria (FAAN) after her “near-death experience” on the escalators at the Murtala Muhammed international airport in Lagos.

The traveller, identified as Elvi, said she returned to Nigeria on September 3, 2022 after spending time abroad with her family.

Narrating her experience on Twitter on Sunday, Elvi said her five-year-old wanted to use the escalator instead of the stairs when they arrived at the airport.

According to her, she had warned her kids in the past not to use escalators in Nigeria following an ugly incident that happened to a boy of her son’s age on a similar escalator.

However, she obliged him because they “travel around the world and escalators are normal to him”.

“On this day, he wanted to and I insisted I hold his hand (there’s no place in the world we go that I’ve held his hand on an escalator),” she said.

“I noticed the razor-sharp edges of the escalator and it was going very fast. I looked down and the very-fast escalator had people tumbling on themselves. Humans started piling on each other. My reflex, I lifted my five-year-old in the air, he spread his legs high while I lay on my back.

“I joined the pile of humans at the base of the escalator. The only defense I had for myself was to raise my head so that only my back was bearing the grind of the escalators. A passenger snatched my five-year-old from me.

“My nine-year-old son, behind me, jumped over the railings and other passengers caught him. My husband was behind me [and] had managed to take a grip that only his back was scratched by the sharp edges. My daughter and Gloria who were behind my husband were running back up the escalators.

“Eventually some people lifted me up at the base of the death-trap called escalators. The immigration officers that were looking at us, looked away while continuing with the job at hand on which passengers will be in a net, ‘catch for the day’.”

Videos shared on social media showed travellers bleeding at the base of the escalators; there were also images of people with bruises, as well as a damaged box.

Thread with pictures and videos attached.
On Saturday 3rd September 2022, I returned to Nigeria with my family. My excited 5 year old wanted to use the escalator instead of the stairs. pic.twitter.com/V7ugZU5pi2

Elvi said despite the pandemonium, it appeared other persons were going on with their activities, adding that it took airport officials over 40 minutes for first aid to arrive after “my husband had shouted down the airport”.

The traveller, who complained of sustaining injuries, questioned the safety of the escalators despite reports that there had been maintenance repairs on them.

Elvi said she would file a suit against FAAN on the matter.

“I wonder who certified and approved the safety/use of these escalators. We were told that they were serviced a few days before. I am definitely going to sue. The state of those escalators is totally unacceptable,” she said.

“As a citizen of this country and a consistent taxpayer, I have the right to raise an inquiry into this matter and sue for damages. It’s more worrisome that protection, safety, support of human life is an outward neglect and negligence of the immigration officers at the airport.”

She further described the incident as “an obnoxious show and dereliction of duty from the immigration and security officials at the airport”.

“It is also appalling that first aid came as the last aid after 40 minutes of this painful ordeal. I was bleeding and anxious to go to a hospital,” she added.

“I don’t think it should be a crime to come back to my country after a holiday abroad only to go through a near-death experience.”

Meanwhile, in response to Elvi’s ugly experience, FAAN asked her to reach out via direct message (DM) on Twitter.