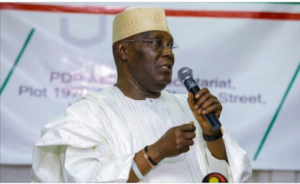 Atiku Abubakar Campaign Organisation (AACO) revealed that the group seeking to raise funds known as Atiku Abubakar Business Supporters in Diaspora (AABSID) is unknown to it.

AACO in a statement, Tuesday said the group is distributing a letter titled “Fundraising Dinner Event for Alhaji Atiku Abubakar Presidential Election Campaign 2023” to potential donors and members of the general public inviting donations to Atiku’s campaign in exchange for unfettered access to the PDP candidate among other promises.

The campaign organisation said its principal, former Vice President, Atiku Abubakar did not authorise any such fundraising event to be held on his behalf nor on behalf of his Campaign Organisation.

The statement partly read “the general public is hereby notified that the aforementioned Atiku Abubakar Business Supporters in Diaspora (AABSID) is not in any way affiliated or related to Atiku Abubakar and the Atiku Abubakar Campaign Organisation, and has not been mandated or authorised in any way whatsoever to represent the candidate or his campaign in any matter whatsoever.

” In line with the foregoing, any person or organisation dealing with the aforementioned Atiku Abubakar Business Supporters in Diaspora (AABSID) and/or its Campaign Coordinator/President or indeed with any other organization for the purposes of raising funds for our presidential candidate does so at their own risk and responsibility”.