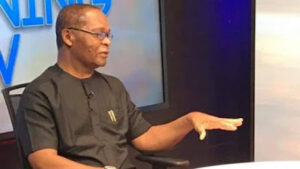 A chieftain of the All Progressives Congress, APC, in Lagos State, Joe Igbokwe, has cautioned Nigerians about the presidential candidacy of the Peoples Democratic Party, PDP, Atiku Abubakar.

He stressed that Atiku’s candidacy is like putting a knife on the things that have kept Nigeria together since 1960.

The Special Adviser on Drainage and Water Resources to Governor Babajide Sanwo-Olu of Lagos State, disclosed this via his Facebook page on Wednesday.

He maintained that the South must produce the country’s next president.

“Those who are still pushing Atiku Abubakar to contest in the 2023 are constantly putting a sharp knife on things that have held us together as a nation for 62 years.

The 2023 presidential election will be Atiku’s fifth attempt at ruling Nigeria.

Atiku had run for the Presidency under several parties in the past.

The 75-year-old secured the ticket of the PDP in 2019 but lost to President Buhari of the APC.

However, Atiku will face top contenders like Bola Tinubu of the APC, Peter Obi of Labour Party, LP, Rabiu Kwankwaso of New Nigeria Peoples Party, NNPP, among others.