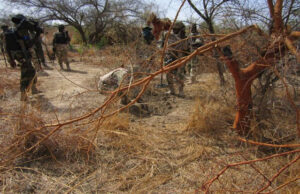 The Military High Command has confirmed that troops of Operation Hadin Kai in a joint land and air coordinated attack killed no fewer than 200 terrorists at Gauchene in Bama Local Government Area of Borno State.

“Also, a total of 556 suspected Boko Haram/Islamic State of West Africa Province terrorists and their families, comprising 115 adult males, 189 females and 252 children surrendered to troops at different locations. All arrested suspects and recovered items have been handed over to the appropriate authority while the surrendered terrorists and their families are being profiled for further action.”

“It was revealed that the suspect ran errands for a suspected high profiled Boko Haram terrorist commander in Kaduna, who is on the tracking list of security agencies. The arrested suspect is in custody for further action.

‘’Consequently, troops embarked on rescue operation and exchanged fire with the bandit and arrested Mr Alex Apera, 26, and Mr. Umaru Halilu, 34. All arrest and rescued victims were handed over to the relevant authority for further action.

“Troops of Operation Hadarin Daji on September 3, 2022, responded to distressed call on terrorist’s activities at Kurar Mota in Gusau Local Government Area of Zamfara State, during the encounter troop neutralized 3 of the terrorists while others fled with gun wound. One of the neutralized terrorists was identified as Dan Nijar Bala, a notorious terrorist who has been on the wanted list of troops and noted for series of kidnapping incidents and attacks in the general area.

“On August 30, 2022, an air interdiction operation was carried out at Alhaji Isiaka village, Kuduru in Igabi Local Government Area and Udawa along Kaduna-Birnin Gwari road in kaduna State.

‘’Consequently, air bombardment was carried out at those locations and feedback of the airstrikes from the 2 locations revealed that several terrorists were neutralized with several others injured.’’