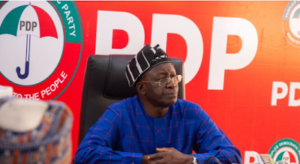 The PDP senator spoke on Sunday when he featured on Sunday Politics, a programme on Channels Television.

Ayu has been under pressure in the last few months, with demands for his resignation coming from different quarters, especially the camp of Nyesom Wike, governor of Rivers state.

Amid the calls for his resignation, the national executive committee (NEC) of the party recently passed a confidence vote in him.

Commenting on the development, Orker-Jev said the calls for Ayu’s resignation should be “negotiated”.

“The biggest enemy of the PDP will be the PDP itself. Every day, I go to bed and wake up very unsatisfied with how things are going,” he said.

“Not to say that things will not be resolved, but it’s not going to be an easy thing. The resignation of the board of trustees chairman is one step to finding the solution to the problem.

“Ayu will step down but it has to be negotiated in such a way that the party will not go into a deeper crisis. The best that can happen is that we call for a special national convention and even change the constitution of the party.”