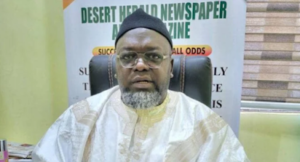 The Department of State Services (DSS) has accused Tukur Mamu, the Kaduna train attack negotiator, of aiding and abetting acts of terrorism.

The security agency said the publisher of Desert Herald is involved in the funding of international and local terrorism.

The DSS alleged that Tukur shares information with terrorist groups, resulting in the escalation of bandit attacks in the country.

This was made known in an affidavit in support of an ex-parte motion marked: FHC/ABJ/CS/1617/2022 and filed before Nkeonye Maha, a judge of the federal high court in Abuja.

According to NAN, the judge on Tuesday issued a ruling on the ex-parte motion moved by Ahmed Magaji, counsel for the DSS, granting the security agency permission to detain Mamu for 60 more days pending the conclusion of its investigation.

“Preliminary investigation so far established, amongst others, the offences of the logistic supplier, aiding and abetting acts of terrorism as well as terrorism financing against him,” the DSS was said to have written in the affidavit.

“That the defendant (Mamu) has used the cover of his profession as a journalist to aid both local and international terrorist groups. That the action of the defendant has orchestrated the untimely death of several security personnel in North Central and North East parts of Nigeria.

“That the defendant has discreetly given several information to bandits and terrorists that escalated various acts of terrorism in Nigeria. That the investigation has assumed a wider dimension and sophistication requiring time and advance expertise to conclude.

“That some of the suspects working with the defendant are at large and premature release of the defendant will jeopardise the ongoing investigation. That it is in the interest of justice and national security to grant this application.

“That the activities of the defendant and his associates at large constitute a potent threat to the unity and peaceful co-existence of Nigeria.”

Recall that Mamu was arrested at the Kano International Airport after he returned from Egypt where he had been detained on his way to Saudi Arabia for lesser hajj.

Mamu, an aide to Ahmad Gumi, a popular Islamic cleric, has been involved in negotiations for the release of persons abducted during an attack on a train in Kaduna, in March 2022.