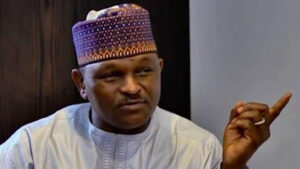 A former aide to the late Head of State, Sani Abacha and presidential candidate of Action Alliance for 2023, Hamza Al-Mustapha, says the next election will provide Nigerians with the opportunity to look for alternatives outside the big political parties that had failed the country in the past.

Speaking in an Interview with BBC Hausa Service aired on Wednesday, the presidential candidate of the Action Alliance (AA), opined that Nigerians would vote for individuals during the election instead of the usual political party that has been practised.

He explained that the election is already here and politics is being played in different ways with some doing theirs openly while others play theirs behind closed doors, saying that for now, the embargo on campaigns for the 2023 elections is not lifted yet until the 28th of September 2022.

He added, “That’s correct but we must know that any political party that’s engaged in a public campaign is simply breaking the sections of the electoral act as regards campaigns. Our party, AA, is a law-abiding party and will continue to be so irrespective of what happened. We don’t violate the law, particularly electoral act, hence we have been quiet regarding election campaign.”

The presidential candidate further explained that they have been having meetings and several consultations with people who matter in their party, stressing that they are also wooing other people who they think can play a great role in their quest to achieve victory in the forthcoming general elections.

The Action Alliance flag bearer confirmed that he paid a visit to Rivers State Governor, Nyesom Wike as the visit was just to have a mutual discussion with him on national issues and other personal issues, saying that not only him but if he sees someone that would be useful to them as a political party, they will not hesitate to visit him or her.

Hamza Al-Mustapha said different political parties were doing things their way; things they think would favour them and increase their chances in the forthcoming general elections, saying that they are doing their strategies and don’t necessarily need to make it public.

He said his party, AA has not been making noise or saying things in the media but claimed it doesn’t stop it from doing something, stressing that whatever is useful and meaningful to one political party may be otherwise for the other political party.

He alleged that many of the acclaimed “big political parties” are banking on the wealth they may have acquired over the years they have been in government, stressing that they would be disappointed this time as the hope and confidence of Nigerians are in the people, they have prayed God to do away with people who have no good intentions for the people of Nigeria.

”Things and times have changed, people might have voted for parties in the past but that won’t be the same this time as Nigerians are not looking the way of political parties simply because they have suffered enough due to poor governance.

”The hardship in Nigeria has hit Nigerians hard that they are looking for solutions instead of relying on political parties, some of which inflicted pain on them.

”The Action Alliance is not as small as people are seeing it but in this coming elections, Nigerians would be shocked by the big political parties who are banking on the wealth they might have “illicitly” acquired over time”.