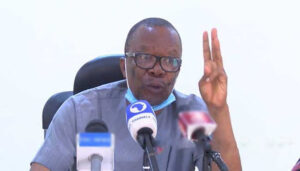 The Academic Staff Union of Universities on Wednesday said it will appeal the ruling of the National Industrial Court of Nigeria, which ordered the union to call off its ongoing nationwide strike and resume work.

ASUU has been on strike since February 14 to press home demands for improved funding for universities and a review of salaries for lecturers, among other issues.

Several meetings between ASUU and the Federal Government have ended in a deadlock.

Consequently, the Federal Government went to court to challenge the strike.

The government through its counsel, James Igwe prayed the court for an interlocutory injunction restraining ASUU from taking further steps as regards the strike, pending the determination of the substantive suit.

Justice Polycarp Hamman held that the application was meritorious and deserved to be granted by the court.

“The balance of convenience tilts in favour of the applicant.

The Minister of Labour and Employment, Chris Ngige, said the government would order vice-chancellors to re-open universities based on the court order.

“The government would order the vice-chancellors to reopen the universities in compliance with the order of the court,” he said in a statement.

The minister added that the court ruling does not preclude the government from going on with further negotiation and consultations.

Speaking with newsmen on Wednesday, National President, ASUU, Prof. Emmanuel Osodeke, said the union will appeal the ruling, adding that the Federal government had denied Nigerian children their rights.

Osodeke said, “Our lawyer is filing an appeal and stay of execution of the ruling. Our members should remain calm and strong. A people united can never be defeated.

“If the FG believes that this is the best way to solve the problem, good for them. They have denied Nigerian children their rights. Nigeria has a country is going to be punished for what the FG has just done,” he said.

“You can be sure that thousands of my colleagues will leave this country. The last time we had this kind of treatment was during the military era.”

The student’s association NANS has also declared that it would disrupt political campaigns if the Federal Government fails to end the strike within two weeks.

The students’ body gave the ultimatum at a press conference addressed by the Chairman of NANS National Taskforce on EndASUUStrikeNow, Ojo Raymond, on Wednesday in Abeokuta.

“Our blocking of access to public roads and ports is just a warning. If the government fails to conclude all the negotiations and agreements with ASUU within the frame of two weeks, they will witness more protests and rallies all over the country.