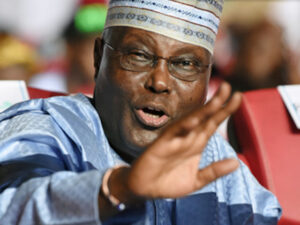 Atiku, who spoke in response to the withdrawal of the Wike camp from the PDP Presidential Campaign Council over Ayu’s retention, urged them to reconsider their stand.

They took the decision of pulling out of the party’s presidential campaign council at a meeting in Port Harcourt, the Rivers State capital, on Tuesday night, saying Ayu must quit because he allegedly compromised the party’s last presidential primary.

This happened on a day immediate past National Chairman of the PDP, Prince Uche Secondus, disowned a case against the party in an Abuja court, just as Chairman of the Board of Trustees, BoT, Senator Adolphus Wabara, assured that the crisis would soon be over after meeting with Governor Samuel Ortom of Benue State, who said he was with Wike and cautioned the party against treating people as trash.

Meanwhile, former Aviation Minister and chieftain of the All Progressives Congress, APC, Mr Femi Fani-Kayode, has counselled Wike to leave the PDP and join forces with the Presidential Candidate of the ruling APC, Asiwaju Bola Tinubu in the 2023 poll.

In a statement he signed, the PDP presidential candidate said his surprise stemmed from the fact that except for Rivers State, all other states nominated persons who were included in the list of council members.

He noted that his attention was drawn to the press conference in which the aggrieved party leaders “declared that they are withdrawing, forthwith, from the Presidential Campaign Council set up by our party to judiciously plan and prosecute the general elections set to hold in February and March 2023, on the one hand; and reiterated their earlier calls for the resignation or removal from office of the national chairman of our party, Senator Dr. Iyorchia Ayu, on the other hand.”

He continued: “The people that addressed the press must have their reasons for withdrawing from the Presidential Campaign Council, and I will not speculate as to what those reasons may be. Personally, I am quite surprised with this withdrawal because, as I have been informed by officials of our party, apart from the Rivers State chapter of the PDP, all the remaining states of the federation submitted names of people they wanted to be included in the Presidential Campaign Council.

“On the calls for the resignation or removal from office of our national chairman, however, I must reiterate what I have said severally in public and in private; the decision for Dr Iyorchia Ayu to resign from office is personal to Dr Ayu and, neither I nor anyone else can make that decision for him.

“As to the calls for the removal of Dr. Ayu from office, however, I will state that, as a committed democrat and firm believer in the rule of law and democratic tenets, and our party being one set up, organized and regulated by law and our constitution, it is my absolute belief that everything that we do in our party must be done in accordance with, and conformity to, the law and our constitution.

“If Dr. Ayu is to be removed from office, it must be done in accordance with the laws that set out the basis for such removal. In any event, you will all recall that the very body that is empowered by law to initiate this removal from office has already passed a vote of confidence in him.“

Atiku noted that the issue at hand which should be of concern to all lovers of Nigeria is that “now, our nation is currently in the throes of a multi-dimensional crisis encompassing insecurity, economic meltdown, disunity and mutual mistrust and educational dislocations, to mention a few.”

He further said, “I have a plan to address these issues and I have, graciously, been given the ticket to lead our great party in next year’s presidential elections, with the singular mandate to come and lead the efforts to cure these ills.

“It is in this light that I have reached out to every single member of our great party to join me in the massive undertaking required to reset the ship of state and help rebuild our country.

“In this light, therefore, I will urge those members of our party that have stated their resolve to withdraw from the Presidential Campaign Council to have a rethink, retrace their steps, and join us in these efforts.”

Rising from a meeting in Port Harcourt, late Tuesday night, Wike and some PDP leaders who are pushing for Ayu’s resignation vowed not to partake in Atiku’s campaign activities pending Ayu’s resignation.

The party stalwarts, who share in Wike’s vision, maintained that there will be no support for Atiku until Ayu vacated the number one office of the party to allow an acting chairman from the South to take over.

The aggrieved stalwarts including some founding members of the party, sitting and former governors, former ministers and federal lawmakers made their position known in a resolution read by Chief Olabode George.

George said: “We resolve that we are deeply concerned by the division in our party. We are aware that over the years our party has developed conflict resolution mechanisms that guarantee inclusiveness. The published presidential campaign council list translates to putting the cart before the horse. The pertinent issue remains the resolution of the leadership which is “Senator Iyorchia Ayu must resign as the national chairman of the party for an acting Chairman of Southern Nigerian extraction to emerge and lead the party on the national campaign.

“Consequently, we resolved not to participate in the campaign council in whatever capacity until the resignation of Dr. Iyorchia Ayu.”

Also, former Plateau State Governor, Senator Jonah Jang, claimed that Ayu was a bad referee, who assisted one side to score a goal during a football match and blew the final whistle.

He accused Ayu of compromising the May 28 and 29 presidential primaries of the party, saying: “For a National Chairman, Senator Iyorchia Ayu to go and embrace Sokoto State Governor, Aminu Tambuwal, calling him the hero of the convention meant that there was a private arrangement that was done with Tambuwal to shortchange other contestants including Governor Wike.

“Here was a referee, who helped one of the sides to score a goal and then blew the whistle. This is not what we formed the PDP to do for Nigerians. Therefore, we unequivocally ask that Ayu must step down.”

Also, former Minister of Information, Professor Jerry Gana, said if the party intended to restructure Nigeria it should have the courage to restructure itself.

He said that their support for Wike was for the sake of equity and justice in the party, not because he lost the presidential primary or because he was not chosen as vice-presidential candidate.

Gana said: “You cannot build on a faulty foundation. This call for the chairman to step down or resign is not because any of us is aggrieved but because we believe it is important to ensure a just, fair, principled and constitutional structure for the party. If we want to restructure Nigeria, we should have the courage to restructure our party”.

The Oyo State governor, Seyi Makinde added: “We hope that the powers that be listen to the voice of reason and do the needful.”

Former governor of Gombe State, Ibrahim Dankwambo said,” we will work for the party to the extent that fairness, equity and justice are ensured.”

Indeed, a group, South-West Forum of PDP Stakeholders for Justice, on Wednesday, reiterated its support for Governor Wike and others sympathetic to his cause that Senator Ayu should resign.

In a statement by former publicity secretaries of Ondo and Lagos states, Messrs Banji Okunomo and Taofik Gani, the forum said Ayu’s resignation will bring about confidence, inclusiveness and oneness in the party.

The statement read in part: “We, the above-named forum of the party, wish to affirm our support for the position being canvassed by Governor Seyi Makinde, corroborated by the doggedness of the ‘Wikes’ and the wisdom of the ‘Bode Georges’, as a lasting panacea for peace and eventual victory of our party at the 2023 Presidential election.

“Assuming Dr. Ayu, in his wisdom, genuinely chose and believed in the emergence of a Northern Presidential Candidate for the PDP and went further to acknowledge Governor Aminu Tambuwal as the hero of democracy following his withdrawal from the Presidential race to pave way for Atiku Abubakar at the Party’s national convention, it is our take, that Dr Ayu should indeed go further to logically and wisely conclude the process that would guarantee the emergence of Atiku Abubakar as the next president of Nigeria by making other possible sacrifices necessary to achieve that goal.”