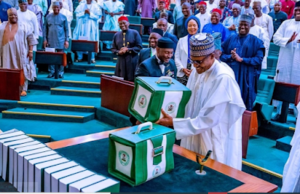 The federal government has earmarked N1.1 billion to the presidency for sitting allowance and welfare packages.

President Muhammadu Buhari, on October 7, presented a record N20.51 trillion 2023 appropriation bill — with a fiscal deficit of N10.78 trillion — to the national assembly.

Themed ‘budget of fiscal sustainability and transition’, it is the eighth and final budget of the current administration.

The budget shows that the presidency will spend N133.7 billion in total.

A further breakdown also shows that the presidency will get N98.52 billion for personnel, while overhead costs and capital projects gulped N17.48 billion and N17.72 billion, respectively.

The state house headquarters as well as state house operations (offices of president and vice-president) were apportioned N19.8 billion.

On the other hand, N93 billion was earmarked for international travel and transport (others) for the state house headquarters.

Meanwhile, N846.6 million was set aside for local and international trips for the office of the vice-president.

Consequently, for all trips in the 2023 fiscal year, the offices of the president and vice-president are expected to receive N3.3 billion.

The state house headquarters is also expected to get N498.3 million for sitting allowance.

Thus, allotment to the offices of the president and vice-president as well as state house operations, for sitting allowance, culminated in N702.8 million.

Also, the state house headquarters and office and the vice-president will receive N388.7 million and N23.2 million, respectively — totalling 411.9 million —  for welfare packages.

However, the office of the president received zero allocation for the item.

The Economic and Financial Crimes Commission (EFCC) was among the line items listed in the presidency budget details.

The commission will get N43.2 billion, out of which N2.5 billion was earmarked for capital expenditure.

According to the project details, the purchase of computer software/hardware acquisition and software license gulped N200 million. Also, N330.7 billion will be spent on the procurement of office furniture and air conditioner while the construction of a new EFCC academy is expected to gulp N2 billion.