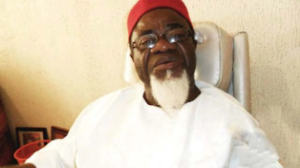 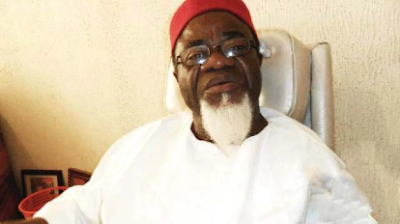 The elder statesman made the appeal when he appeared on Arise Television’s The Morning Show on Monday, adding that the Academic Staff Union of Universities, ASUU, had called off its eight-month-long strike just in obedience to a court, wondering why the federal government cannot even respect its court.

Ezeife believes that God alone will move President Buhari to release the IPOB leader from detention.

“The hearts of kings are in the hand of God. We pray to move Buhari to do justice, to respect the court – his own court. The ASUU people have gone back to school in obedience to court order even though they were not happy with it,” he said.

“Now let our government lead by example and comply with court order. What I heard was that Nnamdi Kanu was discharged and acquitted. But the government can put words in the Court’s mouth that he was only discharged.

“But even at that, if he was discharged of the heinous crimes accused of, that’s even enough reason to free him by the Court’s decision. When we went to the President, we got a very good response from him about releasing Nnamdi Kanu. [Later, I got personal] information that the President wants to release Nnamdi Kanu and Sunday Igboho.

“And [later] I heard only of Igboho being set free from charges against him while Nnamdi Kanu is still there. May God make it that the President will look at the state of the nation and release Nnamdi Kanu. God has created a situation in Nigeria where all eyes are not opened where nobody can say my religion, my tribe, etc.”