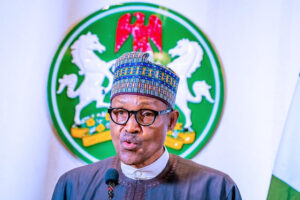 The President, Major General Muhammadu Buhari (retd), on Friday declared the future of Nigeria is safer in the hands of the All Progressives Congress.

This is as Buhari said the APC-led government has managed to make Nigeria stable, laying a solid foundation for progressive growth.

This was made known in a statement signed by the president’s spokesperson, Femi Adesina.

The President, who stated this at the unveiling of the Presidential Campaign Council and the Action Plan of the APC presidential candidate, Bola Tinubu, pledged to be at the forefront of electing the former Lagos State governor as his successor.

He noted that electing Tinubu would consolidate the achievements of his administration adding that the presidential candidate had the capacity, visionary leadership and track record to do more.

He said, ”It would be disastrous to allow a situation that will lead to the reversal of the progress our country has made. Let me add that I joyfully accept the position of the chairman of the campaign council we are unveiling today.

”Our candidate, Asiwaju Tinubu is too well known for his capacity and can-do spirit. He stands tall in his track records as a democrat, a champion of the rule of law, a man at home in every part of our country, and a truly visionary leader. All you need to do is think of Lagos in 1999 and 2022

”I, therefore, want to assure all party members and supporters of our government that I will be at the forefront of this campaign.

”This election is even more important than the election of 2015 that brought us into power. The cost of losing the gains our country has made is much more than the need to stop the haemorrhage that led to our coming together nearly nine years ago.

”I want to charge every member to put in all their efforts during the next four and half months of campaign to ensure we record a resounding victory in all our elections nationwide. The future of this country is safer in our hands.”

Highlighting the achievements of the APC-led administration, Buhari explained ”The efforts of our men and women in the armed forces over the last years are beginning to yield positive outcomes. We are gradually taking back our country from foreign-inspired bandits, kidnappers, and terrorists in the northeast and northwest and other parts of our country.

”We are equally combating separatists, oil thieves and bandits in the southeast and south-south of the country.

”Our administration remains committed to progressively eliminating all flashpoints of insecurity nationwide. We would triumph over the enemies of our country; in whatever forms and shapes they appear.”

The President who described the APC President candidate as ”the Jagaban, my friend, partner, and brother,” said the occasion was important to him for two reasons.

”First, it is significant to note that this unveiling is the third by our Party. I have had the opportunity of unveiling two Action Plans. I had the privilege of presenting our party’s manifesto of Change in 2014.

”It was a manifesto that signposted our collective desire to arrest the directionless journey our country was headed under the People’s Democratic Party. The second time was in 2018 when I unveiled the Next Level agenda of our government.

”The second reason this occasion is significant is that we are having our first transition within our party where I am in the last year of my two-term mandate, and we have a new candidate to lead our party into another Presidential election.

”The events preceding our Presidential primaries and the conduct of the primaries were important milestones in the development of our internal democracy and party politics.

”I must congratulate the leadership of our party, other stakeholders, and the entire party members for the success of the exercise. We can say with confidence, that our party, the All Progressives Congress, is charting a steady course in our journey towards enthroning lasting democratic culture in our body polity.”

The President also thanked party officials in the National Executive Council, the Zonal, State, Senatorial, Local Government, and Ward executives for their unalloyed support to his administration and the great efforts and outstanding commitment to the cause of the party and democracy.

He urged them to be mindful of the importance of building a strong and purposeful political party, recounting that the project of pulling ”Nigeria back from the precipice in 2015 was made possible by putting together a formidable party peopled by many who have made a vow to work for a Nigeria we all can be proud of.”

Buhari charged party members to uphold the supremacy of the party operating within the guidelines as stipulated in their constitution.

He said, ”It is worth reiterating the fact that we are stronger today only because we continue to support the party.

”For us to develop an enduring democracy in our country, we must first subscribe to the supremacy of our political party.

”We must subject ourselves to the rules and learn to operate within the guidelines as stipulated in our party’s constitution.”

The President reiterated his congratulations to Tinubu and his running mate, Senator Kashim Shettima, for the victory at the primaries, commending the maturity and sportsmanship of other contestants.

He expressed delight that most of the aspirants transferred their structures, including campaign offices to the party’s candidate after the primaries, adding that it was a demonstration of the commitment of the party leaders and members to the cause of the party and democratic practices.

He challenged party members to see themselves as ”ambassadors of progressive principles and exemplify the best of us in action and words.”