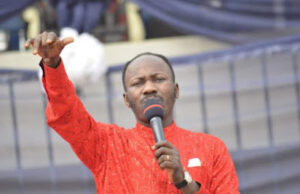 There was a new twist to the alleged attempted assassination attempt on the Auchi, Edo State-based fiery preacher and founder of Omega Fire Ministries, Apostle Johnson Suleman as the Commissioner of Police in Edo state, Abutu Yaro has recalled the Auchi Divisional Police Officer, Ayodele Suleiman of the alleges killing of one of the suspects who was arrested alive by the vigilante in the area and handed over to the police.

The police confirmed the killing of six people and one missing in the attack on the convoy of Suleman near Auchi on his way from Benin City after arriving from Tanzania on a foreign mission.

“As part of the measures of the Command concerning the circumstances that led to the death of one of the surviving members of the monstrous gang that attacked the convoy of Apostle Johnson Suleiman, General overseer of Omega Fire Ministry, the outgoing CP now AIG Abutu Yaro fdc has ordered the withdrawal of CSP Ayodele Suleiman, DPO Auchi for debriefing at the State Headquarters with immediate effect.

“Meanwhile, members of the Public are urged to remain calm and patient as no stone would be left unturned to unearth the circumstances surrounding it”.

A twit by Suleman when the information that the suspect was handed over to the police alive surfaced said “Lies, they weren’t kidnappers. He was caught and handed over and the police killed him immediately. Why? Why killing him on the spot? Who is trying to cover up traces?”, Suleiman queried.

Also, the Ministry’s legal adviser, Sam Amune said in a text to Sunday Vanguard said “This country is in a mess. It’s not balance. No security anywhere. Security system greatly compromised.

One of the assassins was arrested by vigilante, handed over to the police. The police immediately shot him dead. Why will they do that? Are they trying to cover up traces…..we will get to the root of the matter”

Suleman late Friday night said that the attack was an assassination attempt on his life, had traced his travails to the 2017 scandals directed at his person, stressing that having survived the smear campaigns, his traducers, he claimed he would not be named, resorted to the assassination.