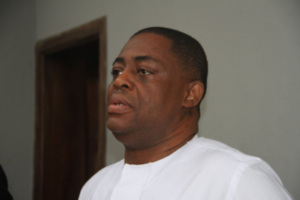 Fani-Kayode noted that errors and positive change are part of governance and the APC-led government has made errors ut has been able to settle them like family, with the next govt continuing the good works of the previous administration

Fani-Kayode stated this In an interview on ChannelsTV on Monday.

According to the APC chieftain, “Every govt makes errors and does positive things. Things the Buhari govt hasn’t done so well will be continued by the next administration. Tinubu’s administration will continue the good things done by Buhari Administration.”

He said “PDP has reneged itself on power rotation, on the promises made to Nigerians but the contrast is what is happening in the ruling APC. We have been able to settle matters like a family, coming together to unite and conceding power to the south.”

The former aviation minister noted that the “Demons in APC have relocated to the PDP. The APC of the past is not the same as that of today; it is better now, says APC chieftain Femi Fani-Kayode. He says having a Tinubu presidency means enthroning righteous leadership.”

Dele Momodu, yesterday said the APC copy and pasted the manifesto of late MKO Abiola without any genuine intentions to liberate Nigerians from poverty.

“At a time when the country is in dire need of clear leadership with vision and courage, all the APC seems capable of doing is to generally copy and paste regurgitated ideas of others with nothing original or breath-taking.”