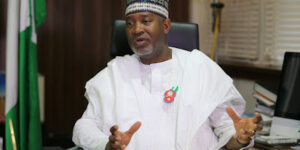 Hadi Sirika, minister of aviation, says Nigeria will not succumb to threats by foreign airlines to shut down operations in Nigeria.

Sirika said this on Monday at a stakeholder meeting held in Abuja, to address issues concerning foreign airlines’ trapped funds in Nigeria.

The meeting was attended by representatives of the airlines, International Air Transport Association (IATA), Airlines Operators of Nigeria (AON), travel agencies, Femi Gbajabiamila, speaker of the house of representatives, and other aviation industry stakeholders.

British Airways had threatened to suspend their operations in Nigeria over its inability to repatriate earnings in foreign exchange.

Also, Emirates suspended its flight operations in Nigeria over the issue, but later resumed after the Central Bank released some funds to airlines.

But last week, the United Arab Emirates (UAE) placed a ban on visa applications from Nigeria.

Speaking at the meeting, Sirika said he expected the foreign airlines to empathise with Nigeria in this difficult situation, given the amount of money they make in the country and should not threaten to shut down operations.

“If you disagree, we expect that you come to us and we negotiate and we give you what we have in the hope that we finish paying; what I have problem with is threats,” he said.

“Every country; every airline will threaten Nigeria. ‘We will not fly to Nigeria again’, ‘we are not giving Nigerians visa’, ‘we won’t do our operations’, ‘we will shut down Abuja and Lagos’.

“Please countries have been shut completely and they did well, there are examples in Asia, the Middle East and even Europe; we are not afraid of being shut.

“If you shut down Nigeria, it does not make any sense and we are not threatened.”

He said there was the need for all stakeholders to shift ground in the interim, but insisted that, in the long run, the solution is to implement BASA agreements.

Gbajabiamila said government would make efforts to, at least, pay half of the trapped funds by the end of 2022.

This, he said, would allow Emirates Airline of the UAE to return to status quo and the alleged UAE visa ban on Nigerians to be lifted.

“Even if we clear the backlog, we will still run into these issues for as long as the BASA agreement of reciprocity is not respected because we will continue to accumulate,” he said.

“If BASA is respected, Nigerian airlines will reduce the deficit going to the foreign airline, so there is no running away from that and we will enforce that.”

Gbajabiamila said national interest should always be on the front burner.

He added that if the visa ban was connected, in any way, with the trapped funds; that would be the most nauseating thing he would ever hear.

The lawmaker said it was important to resolve the issues as failure to do so would be tantamount to “cutting your nose to spite your face’’.

“We will in the long run, sit with the government of UAE and let it know that Nigeria is not a country that you can toy with,” he said.

“I know that there are ways where Nigeria has upper hand on them; the doctrine of reciprocity is not confined to the issue at hand.

“It can be defined in a broad term and that is what I want the government of UAE and indeed any other country to realise. National pride and sovereignty are two important things. What they wouldn’t take, they should not dish out.”