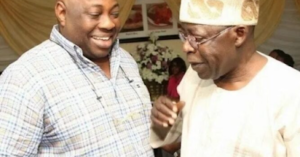 He said this on Tuesday in an interview on Channels Television while explaining his opposition to Tinubu’s candidacy.

“He is the only governor I know who had two deputy governors and they both got into trouble,” Momodu said.

“I’m inferring dictatorship nothing else. I will never support dictatorship. I suffered under dictatorship, I was in detention, and exile for three years.”

When asked if he believes Tinubu is a dictator, Momodu said: “He is a potential dictator, let me use that word.”

Reacting to Festus Keyamo’s description of him as a praise singer, Momodu insisted that Tinubu’s manifesto is an appropriation of MKO Abiola’s legacy.

“Festus Keyamo is an attack dog; he likes to yell. The moment they gave him this job of a minister, a minister where he has been less than competent, where everything is in shambles,” he said.

“If I was in his position I would have resigned.”

On October 23, Momodu described the manifesto of Tinubu, titled ‘Renewed Hope 2023’, as an appropriation of MKO Abiola’s legacy.

Responding, Keyamo, the minister of state labour and employment, said Momodu should stick to praise-singing instead of critiquing policy statements.

The director of strategic communications in the PDP campaign said southerners must understand that democracy isn’t always about fairness.

There has been division in the party over the calls for Iyorchia Ayu to step down as PDP national chairman on the grounds that the presidential candidate and chairman cannot be northerners.

Amid the crisis, some governors — including Nyesom Wike of Rivers and Samuel Ortom of Benue — and other PDP stakeholders have backed out of supporting Atiku Abubakar, the presidential candidate.

Speaking on the development, Momodu said the south needs to learn that democracy is different from revolution.

“PDP has done better than any other party in Nigeria. If you look at our trajectory, between 1999 and 2007, PDP presented President Obasanjo. Then we had Yar’Adua who was in power for three years. Then we had President Jonathan who was there for five years,” he said.

“So, in PDP, we’ve had five plus eight, that’s 13 years — out of 24 years by next year. So, we don’t have that problem in PDP. You can talk about APC and how they are doing or not doing. But I can tell you that the last president PDP fielded was a southerner, from the south-south.

“So, nobody is going to accuse us of entrenching Hausa-Fulani interest. There is a major campaign of calumny today in Nigeria against the Hausa-Fulani, which I find very dangerous. They are Nigerians; they are part of Nigeria, and elections are about figures, about numbers. So, if the Hausa-Fulani are able to manage themselves better than the southerners, so be it.

“I was in that race and I can tell you that the southern candidates never worked together. I even tried to reach some southern governors who would not receive me, whereas when you go to the north, you get this open door. I went to Sokoto and Governor Tambuwal was personally driving me around. In the south, I was just like a nobody.

“So, that is the nature of politics. It is whosoever has the ability and capacity to carry every other person along. And let me warn, in the past, we have had two strong southern candidates. They lost to the north. It happened in 1979 between Chief Awolowo and the Owelle of Onitsha, Chief Nnamdi Azikiwe. It repeated itself in 1983.

“Democracy is not always about fairness. And the best example I can give you would be the American example. How long did it take for an Obama to emerge in America? It’s a game of numbers; it’s not about sentiments.”