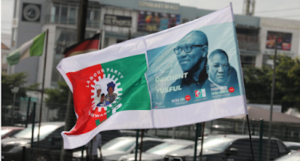 The Labour Party (LP) has released an updated list of its presidential campaign council for the 2023 elections.

On October 12, the LP had released a campaign council list, which was later retracted after concerns were raised, while the party later said the list had “errors and omissions”.

Hours after the list was published, while addressing a media briefing, Julius Abure, LP national chairman, said the presidents of the Nigeria Labour Congress (NLC) and Trade Union Congress (TUC) who were included would be removed.

He had also said John Enenche, former spokesman of the Defence Headquarters (DHQ), who had been criticised for being included in the list, would be removed from the council.

Speaking at a media briefing on Wednesday, Abure said the campaign council would be inaugurated on October 28.

“You will recall that on October 12, we presented the campaign council list,. Obviously, there were some errors, some misplacements and we had general complaints about the list,” NAN quoted Abure as saying.

“As a party that is democratic, that is a listening party, we decided to take all these grievances into account and we then promised that we are going to review the list to update it to accommodate other interests.

“We have been working on the list and I am highly elated today to announce to you that we have received the list and that is the list we are presenting today .

“We are presenting the presidential council list as well as the committee and it is also pertinent to put on record that it is not possible to accommodate every interest.

“It is also pertinent to announce that the campaign council and the committees will be inaugurated on Friday, October 28, then our campaign will kick off in Lafia in Nasarawa state on Saturday, October 29.

“I want to appreciate all our candidates who have been working tirelessly to establish the party. This call, like we have always maintained, is a patriotic duty that history has entrusted on us at this time.”