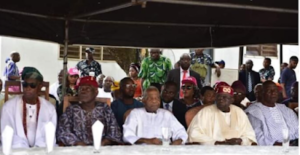 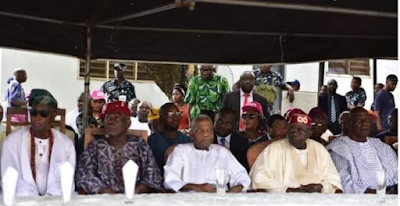 Lawal said this on Sunday at a meeting between Afenifere leaders and Bola Tinubu, presidential candidate of the All Progressives Congress (APC), in Akure, the capital of Ondo state.

TheCable had earlier reported how Reuben Fasoranti, leader of Afenifere, a Yoruba socio-cultural group, prayed for the success of Tinubu’s presidential bid at the meeting which took place in his home.

Lawal, who represented Makinde at the meeting, said the Oyo governor has always been in support of the decisions taken by Afenifere.

“Since he (Makinde) has become a governor, he hasn’t played with issues concerning Yorubaland,” Lawal said.

“There is no time Baba (Fasoranti) calls him that he doesn’t answer. Whatever they are doing, whether it’s under Afenifere or another group, governor Seyi Makinde has always been doing.

“Now, we are not of the same party, but we are connected by race. For this reason, the message he (Makinde) sent is that in Yorubaland, whatever you do, he is in support of it.”

Fasoranti’s endorsement of Tinubu comes weeks after Ayo Adebanjo, one of the founding fathers of Afenifere, backed Peter Obi, presidential candidate of the Labour Party (LP), for the 2023 elections.

Adebanjo, who explained his reasons for supporting Obi, had attributed it to the principle of equity and federal character.

Meanwhile, Lawal’s remarks also come amid the crisis in the Peoples Democratic Party (PDP) of which he and Makinde are members.

Nyesom Wike, governor of Rivers, and his associates, including Makinde, have been demanding the resignation of Iyorchia Ayu as the national chairman of the PDP.

They vowed not to participate in the campaign of Atiku Abubakar, presidential candidate of the PDP, until Ayu resigns.

According to Wike, Ayu had promised to step down from his position if the party elects a presidential candidate from the north because he hails from Benue, a state in the north-central geopolitical zone.