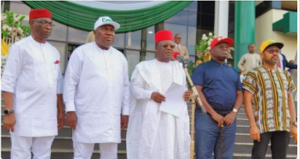 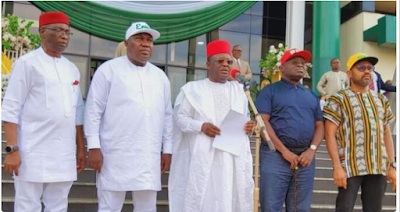 Governors from the south-east zone say they believe a “political solution” is a possiblity on the charges filed against Nnamdi Kanu, leader of the Indigenous People of Biafra (IPOB).

Dave Umahi, chairman of the south-east governors’ forum, said this on Sunday after a meeting of the governors in Enugu.

“We believe that a political solution is still possible in this circumstance,” the governors said.

On October 24, the court of appeal had reserved ruling in an application by the federal government, seeking to stay the execution of a judgment which discharged Kanu of terrorism charges.

A federal high court in Umuahia, Abia state, had subsequently ordered the federal government to return Kanu to Kenya.

In the suit filed through his counsel, Aloy Ejimakor, Kanu had challenged his extradition from Kenya by the “agents of the federal government”.

The IPOB leader had claimed that he was kidnapped from Kenya by the federal government.

Speaking further on Sunday, Umahi said the governors took a decision to set up 24-hour patrol on highways in the south-east as part of efforts to address kidnappings and killings.

“South-east governors decried the state of insecurity in the [zone], while kidnapping and wanton killing have become the order of the day,” he added.

The governors also agreed to pool funds to assist victims of flooding in the zone, just as they urged the federal government to provide support to aid south-east residents.

“We request the federal government to come to the aid of the victims in terms of rehabilitation of the internally-displaced persons,” he said.

Meanwhile, at the meeting, Chukwuma Soludo, governor of Anambra, and Hope Uzodimma, Imo governor, were represented by their deputies — Onyekachukwu Ibezim and Placid Njoku — respectively.