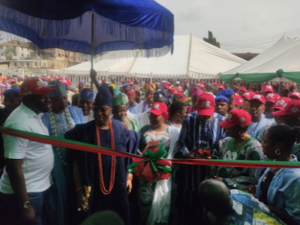 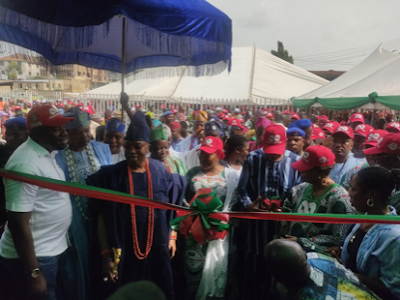 Nigerians have been urged to have faith in the Presidential candidate of All Progressives Congress, APC, Asiwaju Bola Ahmed Tinubu and believe that he will not disappoint the country if he wins the 2023 Presidential election. The call was made by Senator Dayo Adeyeye, National Convener, South West Agenda for Asiwaju (SWAGA) during the commissioning of the Osun State secretariat of the Tinubu/Shettima Presidential Campaign on Thursday, November 3, 2022, in Osogbo, capital of Osun State.

Oyetunde Ojo, who represented Senator Adeyeye, described the APC Presidential candidate as a man bereft of religious bigotry and someone who ensures that things are done as and when due.

Ojo who revealed that SWAGA started from Osun State also added that Asiwaju will be President for all Nigerians, not Yoruba alone.

Wole Oyebamiji, the Secretary to the Osun State Government who represented Governor Adegboyega Oyetola, stated that the idea behind SWAGA was to ensure that Bola Ahmed clinched the APC presidential ticket. He noted that with the emergence of the Tinubu/Shettima ticket, SWAGA has become a vehicle to ensure victory for the APC in the February 2023 presidential election.

The Oluwo of Iwo, Oba AbdulRosheed Adewale Akanbi in his remark warned against betrayal. Speaking on behalf of other monarchs present at the event, Oba Akanbi urged all eligible voters to vote en masse for Asiwaju Bola Ahmed Tinubu.

His words: “We must all vote for Asiwaju Bola Ahmed Tinubu because he is our son. We will curse anybody who wants to betray this cause. So we warn against betrayals because it will have consequences.”

Oba Akanbi also maintained that the move for Tinubu to be president in 2023 is greater than the quest of the late Obafemi Awolowo adding that Awolowo’s prayers must be answered.

The wife of the Osun State Governor, Kafayat Oyetola remarked that Asiwaju has contributed in many ways to improve the lot of Nigerians.

“Bola Ahmed Tinubu is a rare specimen and Nigeria needs a man like him. I urge everybody especially the Yoruba to vote for him and on my part, I have promised one million votes from Osun. The campaign has begun for us because he is a qualified Yoruba candidate and our vote is a means of showing our appreciation to him for all he has done,” she said.